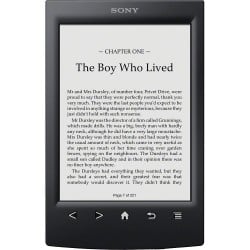 Late Thursday night I broke the news that Sony’s new ereader, the PRS-T2, had leaked on the J&R website. It was a great scoop, and I was rather pleased with myself. But it turns out the story isn’t over with yet.

I sat back today to watch as the major blogs picked up the story. I rather enjoy getting credited for scooping the big guys; it’s an ego boost, frankly, and it’s half the reason I blog (job satisfaction). But the reposts from the major blogs were few and far between. I myself tipped them to my post, so it was a little puzzling that they didn’t pick it up.

Given how hot this story is, it’s rather strange that these blogs didn’t post it. I mean, I could see some missing the tip, but I know they watch Engadget so clearly they should have picked up on that source, don’t you agree?

Well, I’ve just learned of a reason why these blogs might not have posted. A friend of mine (who doesn’t work at any of the 5 blogs mentioned above) told me that he was aware of the new device and was under an NDA from Sony. His site didn’t cover last night’s leak either.

Coincidence? I think not.

An NDA can only mean one thing. Sony is talking to the press and they are about to launch the device. Yes, Sony is doing press briefings on the new Sony Reader. And yes, they excluded me this time.

Folks, you  might not like me calling them names but excluding me was a very poor decision on their part. If I had been under an NDA I would not have been able to post last night. Had I signed an NDA I wouldn’t be telling you right now that Sony is about to launch their next ereader. Whoops.

— More to come. I’m still waiting on replies from a couple of sources.

Kindle Paperwhite and the Kindle Are on Sale for $89, $69

Ha! As I told you, I was at J&R’s site last night before sleep. Had I bothered to check eBook Readers in addition to Android tablets, I would have seen it and done my own post. I don’t give a shit if Sony ever invites me to any event ever again. That company is becoming irrelevant.

Since they also ignored Engadget they’re obviously just not doing their job. This is no surprise since Sony has become real sloppy.

I wonder if Engadget and SlashGear wrote it up because some minor staffer saw the tip and posted the story. Each of those blogs is big enough that there’s a chance someone might not have known about the NDA.

As there is Obon this week in Japan (till the 15th), I don’t think Sony will lunch the new e-reader this week.

They’re launching it on the 16th.