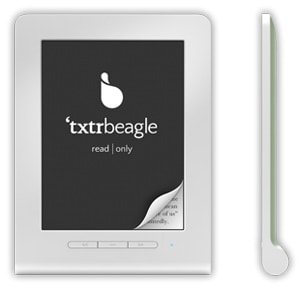 A few minutes ago I showed you the new ereader from Bookeen, the one which was following the trend of lighted higher resolution screens.

Txtr, a German ebook developer, went in the other direction. They’ve just unveiled the Beagle, their new cheap ereader. This baby has a 5″ (800×600) E-ink screen and measures less than 5mm thick. It’s being pitched as the smallest ereader in the world, and for once that marketing hype might be true.

This ereader fills a volume of only 100CC, so while it might have a larger footprint and weight than the 111 gram Trekstor Pyrus Mini, it very likely has a smaller volume.

The Beagle doesn’t have Wifi or a touchscreen, but it does have something almost as good.  It has Bluetooth, and that means you should be able to pass ebooks from your Android smartphone or tablet – no cable required. That is a really smart move; txtr just made it easy for anyone to add the Beagle to their existing stable of mobile devices without having to worry about the hassle of another set of cables. But the press release does say that this is Android only (the app requires Android 4.0), and that could be an issue. 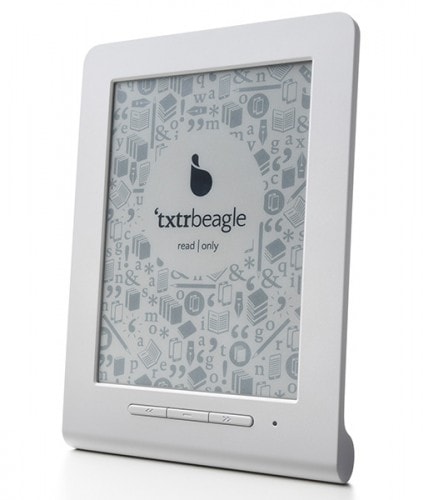 Update: A txtr rep has shown up in the comments and he says that the txtr iOS app will also soon get support for transferring ebooks to the Beagle – PCs too.

Power is supplied by a couple AAA batteries, and txtr is boasting that you can read for a year on a single charge. The Beagle also comes with 4GB of storage (no card slot), and the pared down hardware has resulted in the Beagle weighing in at only 128 grams.

Final Update: And here’s the catch. One reader noticed (and txtr has confirmed) that the Beagle can only carry 5 ebooks at a time. They have to be pre-rendered by the Android app before being transferred over. (Thanks, Flobber!)

As for price, the 10 to 20 euros mentioned before is the subsidized price; I don’t know what the actual retail will be. If you want the lower price you will need to contact a cell network which carries it and buy it from them – with contract, probably.

Second Update: txtr’s promo video is finally live on Vimeo. it had been locked when this post was published.

There had been previous attempts to sell ereaders via the major mobile networks, including Amazon’s ongoing partnership with AT&T,  but so far as I know none had been all that successful in selling lots of devices. I think the txtr Beagle could change that.

Txtr has come up with a device which complements most any Android smartphone in size, weight, and function. It practically sells itself.

Sony and E-ink Announce Joint Venture – Yay, Another One!

>>>Power is supplied by a couple AAA batteries, and txtr is boasting that you can read for a year on a single charge.

You mean "on a single pair of batteries."

First thing a heavy reader will do is feed it rechargeable AAAs. 🙂

Yeah, I already carried spares in my Palm III days!

Looks like a near miss.
It has a *lot* of highly desirable features but the tie-in to the cellphone operators probably means it will be tied in to proprietary ebook stores with limited big-publishing-only content.
It also means the raw price probably won’t be as attractive as the Kobo mini.
Too bad…

"But the press release does say that this is Android only (here is the required app), and that could be an issue."
Why?

Apparently the reader is intended as a cellphone accessory. Which implies a lockdown and a tie-in to the telcos ebookstores.

iPhones, laptops, iPads, and a bunch of other devices have Bluetooth but cannot be used to transfer files to the Beagle. That is an unfortunate limitation. Also, the Beagle’s functionality is dependent on the smartphone’s battery life.

I would much prefer to find a way to transfer files from my laptop. That would be easier for me.

check this graph: http://www.nu.nl/files/datajournalistiek/highcharts/examples/marktaandeeleuseptember.htm. Only Spain has a higher percentage of Android users… (for those not fluent in Dutch, the countries in order are: Great Brittain, Germany, France, Italy, Spain, Europe and the US)

Did they ever unveil the mini? I thought it was speculative. This announcement sounds more official.

Transfer ebooks from your laptop comes next. Supporting iOS too. Reading on the txtr beagle does not require your smartphone. So it’s off-line in that sense. To transfer a book your smartphone must be on of course. Reading on the txtr beagle will impact the smartphone battery less than reading the book on that smartphone. On a different note, txtr’s eBook platform is Adobe certified. The beagle however does not count as an extra device in the Eco system.

Thanks for the update!

While it’s good to know that the Beagle is Adobe certified I know I won’t ever need it. Adding that to the Bluetooth file transfer increases the chances that the process will fail. I would only transfer DRM-free ebooks for that reason.

[…] German e-reader company has launched its device . Likely to be priced at a startling €10, the txtr beagle  5” e-reader is small and light, and runs on two AAA […]

[…] We’re all used to seeing keyboards, headsets, and speakers as Bluetooth accessories but have you ever seen a smartphone with an optional ereader as an accessory? Txtr, an ebook developer based in Berlin, just unveiled the Beagle. […]

Wait. What? You have to use an app separately to transfer an eBook to the Beagle? Huh?

I’ll say. Its starting to remind me of their earlier, aborted reader. Great design sense wrapped in… questionable… software and business model.
Still no word on the real, standalone price?

Looks like the device is really dumb. The Android-app pre-renders the books and the reader itself may only hold five of them; no dynamic fonts-styles or sizes, no orientation switching. Seems to be just an image-viewer with 5 folders – an accessory for your mobile phone. And if you watch the youtube video you’ll see that you don’t want to change the batteries more then once a year …

So business as usual for txtr – they screw up.

But it has 4GB of storage. Where did you read that it only holds 5 ebooks?

Edit: The press release says it can pre-cache up to 5 ebooks. I think that means you can have 5 open at one time, not that you can only have 5 on the device.

The German product page (http://de.txtr.com/beagle/) says under "Technical Details": Speicher – 4GB; bis zu fünf vorgerenderte Bücher (Memory – 4GB; up to five pre-rendered books). Of course, 4GB is plenty for only five books. Maybe the limit is due to Adobe license details – they claim they don’t need extra licenses for the reader, only a single license for the phone.

Also under "Technical Details": Unterstützte Medienformate – alle vom Smartphone oder vom PC unterstützten Formate (z.B. ePub, PDF) (Supported media types – all types supported by the smartphone or the PC (i.e. ePub, PDF)). For me this sounds like the reader itself does not support any format (except its proprietary pre-rendered format). Even if you could put ePubs on the device, it wouldn’t know how to render them.

I think you are misreading those details. If the Beagle could only handle 5 titles at a time then the 4GB of storage would be exceedingly redundant.

German IT-magazin Heise just updated their article about the Beagle to mention, that it only holds up to 5 books. Same on Golem news.

As I see it, the Beagle only has a tiny CPU (maybe ATmega size, like Arduino) without much RAM. As is known, an eInk display takes no power while idling, but on regular ereaders the 32-128 MB of RAM is the battery killer. It needs to be refreshed to hold the rendering-engine (and often a Linux OS) in memory. With pre-rendered books and a tiny CPU, you can turn the whole system off (no touch panel, gyro, sdcard that needs to be powered). That’s how you can get 1 year out of two AAAs.

I just got confirmation from txtr. You are correct.

What a great idea…what terrible execution.

I hope other companies are paying attention and realize there is a huge market for a small, very cheap portable ereader that is designed properly.

It would have been a great solution for schools in the developing world if the software wasn’t so limited.

Well…
there are a few drawbacks.

According to this article
http://www.lesen.net/ereader/txtr-beagle-kleiner-preis-grose-fragezeichen-5446/
it’s just a Vizplex-E-Ink-Panel and the prerendered books are said to be Pictures that still fill up the 4 GB of memory and through Bluetooth, this could take a long while for more than one book.

Without a mobile contract it is said to go around 60€.

If you just consider to start reading e-books and have a new contract for some device on the way AND some provider offers a good deal…. yeah, this could be the right choice for you.

But if you are serious about ebooks there are a lot of good choice in the 60-100€ pricerange to be considered instead.

Uh… 5 Books only, pre-rendered via Android and no real-time store? Thanks, but i’ll keep my Kobo Mini – kobo.com/kobomini . most of my travel reads come after an in-flight/meeting recommendation and purchased on-demand. Like the price, but for a few Euros more, my time is worth the flexibility.

[…] This week also heralded on what could be the cheapest ereader ever sold. The Txtr Beagle reader which is developed by a German company will be priced at around 10 to 20 Euros. It is a 5 inch screen but is restricted to Bluetooth only and has to be tethered to a Smart Phone app  although there are plans to release a PC one where you can download and buy ebooks and send them directly to the ereader.  However there is a catch as there is some restrictions such as the fact you can only have five books at time on the ereader. It will be interesting to see if this is a successful venture. […]

[…] Super Cheap E-Readers, Are we at the point where we can just pick one up from a stack somewhere? s […]

[…] last year when txtr unveiled their smartphone accessory, the beagle? It may have taken well over a year but that faux ereader with a 5″ E-ink screen […]

Txtr Beagle Gets a Puff Review in The Guardian and Eviscerated in the Comments | The Digital Reader August 1, 2016 um 4:03 pm

[…] device was launched in October 2012, but has only seen marginal market success. Txtr had originally planned to sell it via telecoms, […]