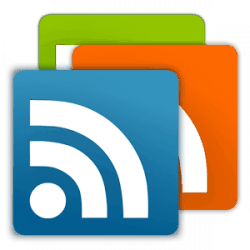 just finished a week-long trial of the Android news reader app JustReader and its performance was so disappointing that I was thrilled to learn today that a competing app had released a major update.

Earlier this week, gReader rolled out a new update with several improvements and updates.

gReader is one of the better known news reader apps for Android. Originally designed to work with Google Reader, it survived the Readerpocalypse last year by spawning a system of extensions to enable Google Reader’s replacements to add support for gReader. It was updated yesterday.

According to the changelog, gReader 3.6 now boasts support for The Old Reader and Feedly.  The app can now also work independently of services like Feedly (it can poll RSS feeds directly, yay). Other improvements include new layout options which should let you tweak the text to look the way you prefer, improved text wrapping in Kitkat, and improvements to gReader’s home screen widgets.

This is good news for me; I need a replacement for JustReader.

I took my Hisense Sero 7 Pro Android tablet on a conference trip last week and tried to use the JustReader app (the free version) to keep up on the news.  After a week of intensive use I have realized that the app is unstable, slow, and has trouble staying synced with BazQux, my preferred service.

Since JustReader has shown itself to be useless to me, I need to find an alternative. Any suggestions?

I haven’t tried gReader (or really any other news reader app ) since I wrote a roundup of similar apps last August, so I’m a little out of date. But I do know that there aren’t very many apps which work with BazQux, so my options are limited. On Android I think gReader and AmberRSS are my only real options.

Have you tried either one?

ARRESSESS Has a Pretty Logo, a Clever Name, But Not Much in the Way of Features

You could also try www.hinto.co as a news reader, it’s a pretty cool app 😉