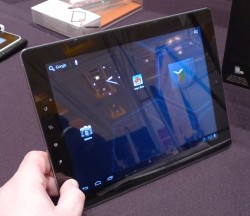 I caught up with E-Fun last night, and they let me spend a few minutes playing with the Elite 10. When I wrote about this tablet last week, I called it an iPad competitor. Now that I’ve put my hands on it I really think it might be one.

It’s running on a 1.1GHz dual core CPU, and it has a pair of cameras (2MP & 5MP), Bluetooth, Wifi, HDMI out, and it will ship with the SlideMe app store.  The demo unit didn’t have much in the way of software, but I did play around with the browser and Angry Birds. Performance was quite zippy, but that should come as no surprise (because of the dual core CPU).

I was told that the street price will be around $240, and that it was coming out this spring.

That’s a great price, but it also brings some compromises. It’s using the same 9.7″ screen ( 1024×768) as on the current iPad, and that means it has a lower resolution screen than some high end Android tablets. I also suspect that when tested, the battery life won’t measure up to other Android tablets, but I can live with that.

And there’s one particular detail that separates the Elite 10 from other premium Android tablets; it doesn’t have Android Market yet. But I am told that E-Fun is waiting on approval from Google. They expect to be able to ship the tablet with full Marketplace access as well as the usual Google apps.

But still, it’s a pretty zippy tablet for something that costs only half the price of the iPad. I cannot wait to get my hands on one.

Is that 4:3? You should have tried a Google Books PDF on it! See just how "zippy" it really is.

Probably not (I can’t actually find numbers on thickness for this one), but the Toshiba Excite X10 (AT200?) probably will be.

There is nothing to say that a new iPad actually will be thinner, though. Is this a complaint?

Hey, Does anyone know what exacted dated it will come out to buy. I want to buy one and challenge it, so I can do a full review but, so far it is looking really good and great in the price range on the street price, than that of an iPad, but until many consumers get hold of it can you truly see its true potential.

Has this elite edition come out yet? I bought the 10 SE and was hoping for bluetooth but got none. I see a lot of reviews for the elite but no sign of it even on the nextbook web page. Please email me an answer. This tablet is great. Very fast and shiny. 🙂

I don’t think it ever did launch.

One thing I am just beginning to learn is that most all of the tablet pronouncements made at and around CES are nothing more than vaporware. This tablet proves my point.