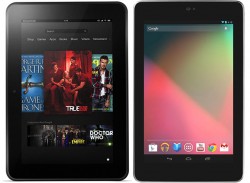 I never reported on the rumor myself, but I never doubted that it was true. This was one of the side effects which I expected to see ever since Jeff Bezos first held up the Kindle Fire HD.

The thing is, when Jeff announced that the KFHD would ship with not 8GB of storage but 16GB,  he raised the minimum standards for competing tablets. It may have taken a couple weeks or more for this to percolate through the industry, but as you can see from the actions of Google and Kobo (they upgraded the not yet released Arc) it is having an effect.

While I suppose this is a good thing, I’d much rather have a card slot. Removable storage would allow for several useful tricks for sharing content across my several devices, including giving me the option fo taking high quality photos with a camera and then tweeting them from the tablet. (And that’s not as silly as it sounds.)

But I have come to accept that Apple, Amazon, Google, et al are going to release tablets and ereaders without card slots so there’s little point in complaining. (Thank you, B&N, for bucking the trend.)

On a related note, one thing that surprised me about the recent Nexus 7 news was the price. According to one screenshot the 32GB model will be priced at $259.  That’s $10 more than the comparable KFHD or Kobo Arc model, and while you do get more hardware for the price it is still surprising to not see Google match or beat the $249 price for the 32GB KFHD. You would think they would be more price conscious.

If the iPad Mini invites go out Wednesday, who cares about the Nexus?

Only those of us who are locked in to the Google and Amazon app stores and reject any sort of dependency on Itunes.

Who? Everyone on budget less than $299. … and that’s only if Apple manages to come in under the $300 mark. Apple may ship iPad mini as a line-up replacement for the slot the iPad 2 is currently taking. If that is their intent then it would priced the same at $399. That’s roughly 2x these entry 7″ prices. It is somewhat possible Apple will shoot for $299, but they may not feel the need to go quite that low.

The iPad mini is also going to be heavier than the current major 7″ offerings. More expensive, heavier, and harder to hold in one hand for extended period of time all combine to give these 7″ alternatives some competitive breathing room. The mini , as essentially an 8″ offering, will tangle more with the 9″ models ( Kindle HD and Nook HD+ ) than with the 7″ battle below the $250 price point.

I wouldn’t think the iPad Mini will be that much heavier than the average 7″ tablet, but if it has the same CPU as the new iPad then it might. It would need a lot of battery power.

On the other hand, I could easily see the iPad Mini replacing the iPad 2 at the $400 price point. Assuming it doesn’t have the ridiculously high res screen, it won’t need the more powerful CPU or extra battery life.

The other thing that is a given is that Google is rushing to get a Nexus9 out the door no later than CES2013.

A Nexus Jellybean (4.1) or 4.2 ( key lime pie ) Phone was far more likely a project for Google to spend time on this Summer and Fall than a 9″ tablet.

These Nexus projects are pragmatically just targeted R&D projects. They need a phone more than yet another Nexus tablet. A Motorola 4.2 tablet ( Xyboard next generation) would be a better move.

There is not likely to a be hardware vendor with a "spare" design this Fall given the chase after Windows RT tablets.

Well, if Google doesn’t do a 9in tablet by CES2013, they’ll be giving the forked tablets 6 months or more to eat up market share an establish themselves. It will also encourage other would be players to set up their own forked content eco-systems.
That Google did the Nexus 7 in the first place is plenty indication they did not want Amazon’s fork to go unchallenged; with both Amazon and B&N both seriously undercutting the larger android tablets they *need* to follow up or concede a permanent fracture of the android tablet market. (shrug)

Your huge assumption is that the forked 9″ tablets are going to get deep, permanent traction. Also that Google is the only vendor that can respond. Nexus devices are not market leading devices in terms of numbers. If a subsidized Nexus devices is 'necessary' for some market then that market is pretty much doom from a general Android standpoint.

If they avoid celluar modems (and overhead of service provider qualification testing) there is nothing that is stopping some of the larger vendors from coming out with a very thinly skinned Android 4.2 (or 4.1.x if this comes as just extras update) WiFi only Tablets by CES 2013. There is even less stopping them from updating to 4.1 even with custom skinning since they have had 3-4 months to work on them. They lack subsidies but can also have added value like two cameras, GPS , etc.

The hardware aspect is a non-issue because it would relatively straightforward just to make some minor tweaks to any of the rash of Windows RT tablets coming out at the end of this month to turn them into a 4.1 or 4.2 Android tablet. ( Very similar tweak and then sell that Google did to the ASUS prototype they latched onto at CES 2012 and then released 6 months later. )

There is a *huge* difference between the Android market not responding to Amazon and B&N 9″ reader/consumption focused offerings and Google Nexus devices responding. It isn’t the same thing.

Looking in the wrong direction. iOS and Windows RT are the long term competitive threats to Android on tablets. Amazon and B&N are even less a threat to Android in tablets than RIM is a threat in the phone space.

The 'forked' threat cuts both ways. The more mainstream Android market is much bigger and has much more momentum than just tablets. A factor that has already pulled Kobo into being a general 'Google Play' distributor.

No, I’d point to the Vox getting Google Play as a better sign. Google is now willing to work with almost any tablet that can compete with the Kindle Fire on price. Bringing those tablets into the official fold boosts the count and makes the Kindle Fire fork look less threatening.

Installed base matters.
As does visibility/mind share.
The general public is a whole lot more aware of the FIRE and Nook than the other (much pricier) Android tablet vendors.More, the bulk of generic Android’s strength is coming from *subsidized* phone sales so the general (non-techie) buyers has grown to expect android hardware to be cheaper than the hardware-only tablet vendors can provide.
Again, the reason Google did the Nexus 7, undercutting their own OEMs is precisely because the subsidized-hardware model of the forks is undercutting generic android and they aren’t ready to start sharing their PLAY revenue with the OEMs.
Amazon made it to 22% is less than six months.
And that was with a product that wasn’t too different from generic 7inchers.
Right now, the only comparable product to the FireHD9 is the NookHD+ so the field is wide open for both.
Add in the baby unicorn and the next quarter is not going to be terribly kind to generic android OEMs.
Add in the lawsuits and android tablets could easily start to look like a lot of trouble for very little return.

TBH, I find it more surprising that Google didn’t think of the subsidized model first. They already sold all the types of content which Amazon is using to support the Kindle platform, so it wouldn’t have been impossible for them to come out with the nexus 7 a year earlier.

"… Again, the reason Google did the Nexus 7, undercutting their own OEMs is precisely because the subsidized-hardware model of the forks is undercutting generic android … "

No. The reason they did Nexus 7 was that there was no 4.1 Jelly Bean demonstration device on the market. They also needed a 'Google Play' oriented device ( and not betting the whole farm in that respect on Nexus Q … which in retrospect turned out to be a extremely reasonable thing to do. )

Nexus devices are demonstrations typically of a combination of either hardware (e.g. NFC + Google Wallet ) and/or Android software versions that Google feels the vendors aren’t quite doing quite right yet. That is what makes them pragmatically R&D projects. It is also why most Android vendors don’t really mind; because they are limited in market scope and time.

Amazon and Nook pricing played a secondary factor on Nexus 7 more minimalist approach to hardware, but those are not the primary drivers.

As the 7″ tablet expands past just a color ereader focus the generic players will have more traction. The 9″ Fire and Nook will do OK but it is unknown if they will be a break out success. Apple is targeting double digit million numbers for initial Quarter for the iPad mini.

Google is *in fact* rushing to do a large format Nexus 10 .
Since they’re in a rush (heh, heh) to get *something* they are going to co-brand the next Samsung 10incher. (Apparently, they couldn’t wait to do a Nexus-only.)
We’ll have to see what the pricing is but the specs sound very much like the forked tablets specs. And the release date looks to be CES2013.
They *had* to do something.
So they are.

I doubt it. Jelly bean hasn’t been out long enough.

They should just discontinue the 8 gig model. It’s not available in retail stores as far as I have seen. I have only seen the 16gig. They drop the price of the 16 gig 10 $199 and 32 gig to $249. It’s the only way to compete this Christmas season when people are c0mparison shopping it next to the Kindle Fire HD.

Certainly in the UK the 8gb is only by mail order, which also brings a delivery charge. You can pick up the 16gb in a shop for £30 more than that. Which is what I’d do if I decided to get one; which I may well do if the iPad Mini turns out not to exist

Office depot had the 32 gig tags on the shelf for $249 but when I wanted to buy it, they said they were out of stock on it.