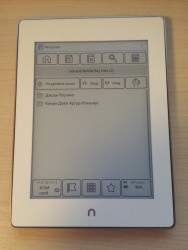 Hackers have found a new and easier way to hack B&N’s latest ereader. ADB is still required, but now Glowlight Plus owners can simply install a single file, run a couple commands, and turn their NGP from a locked down ereader into an Android ereader.

It only took a couple days for hackers to crack the Glowlight Plus, and barely a week before they told us how to install apps, but things have been relatively quiet for the past month.

But now Mike Cane has found a proof of concept video as well as a post which explains how to carry it out. That’s great news but it also comes with a caveat: the instructions are in Russian, and the hack has been customized work best that language.

English speaking users won’t have the best experience, but on the plus side this trick does give you an easy to install the apps you will want/need, including:

All of the programs are set to the best settings for E-ink, and have been specifically tweaked for the Glowlight Plus. So not only does this hack save users from finding the apps, it also saves them from having to spend hours getting it to work its best.

Run this hack and (assuming it doesn’t brick your device) you’ll end up with the device that many think B&N should have released all along. You’ll have an Android ereader.

Given B&N’s recent quarterly report, it’s clear that the Nook is in its final days, but it’s still nice to see what could have been released had B&n decided to be bold and take risks.

[…] hacking script has been released on XDA Forums. Unlike the script I showed you last week (which installed tweaks and a new home screen), this script uses ADB to give you root access to your Nook Glowlight […]