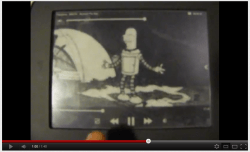 There’s been a lot of action lately with the hacked Nook Touch and the fast refresh hack (here, here). There have even been 3 videos posted with the Nook Touch playing videos (animated GIFs, but cool none the less).

I was all set to post those clips when I found one of the Nook Touch playing an actual video in a media player. The resolution is only 240p (hardware issues, I’m told), but it does work.

I now this isn’t much, but it’s still real video on an E-ink screen and it looks like it’s nearly 30fps (20 frames per second, at least). We’re living in the future.

BTW, it looks to me like the animated GIFs are actually faster. In case you’re interested, they were made by converting a video to the image format. You can then open the GIF in Opera on your Nook Touch (or any other device, actually.)

If Inkling’s Products Are so Great Then Why Does the CEO Come Across Like a Snake Oil Salesman?

FFS! How in the bloody world did you find those? There’s no "Nook Touch" or even "eink" mentioned in the description and he didn’t even title the damn video clips!!

Those 3 clips were all mentioned in the same XDA forum thread. Finding the video clip was dumb luck.

GAH! That’s what happens when I skip some days monitoring XDA.

That is one of the gifs, I think.

The Artist, the first Oscar-winning film made especially for the Nook Simple Touch. Hahahahaha.

[…] The Nook Touch can do a fast refresh (and even play video) and the Kobo Touch can play Tetris, so today’s news that the Kindle Touch has been hacked to […]

[…] The Nook Touch can refresh the screen nearly fast as LCD screens and it can play video, but it wasn’t until last week that it got the ability to support multi-touch gestures. This […]