Nook Touch Has USB Host, Can Use a Keyboard 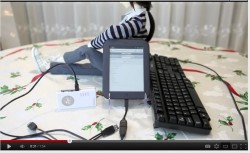 Have you ever wanted to write an ebook on an ebook reader? (No, actually). Well now you can!

One enterprising hacker going by the name of verygreen was asked to look into USB host for the Nook Touch. He noted that the NT had a lot in common with the NC, so he started looking to see if the NT could take  keyboard. It can, because it turns out that the NT has the hardware for USB host.

But the reason this hasn’t worked before is that the NT lacks the software. So in order to get this to work he had to cobble together  patch that added software support for USB Host. As you can see from the video below, he did get it working.But it is a work in progress, and he has posted the working code so you can hack your NT.

BTW, this isn’t the most unusual thing that I’ve seen the NT do.  No, I think watching it play a Youtube video was a bigger surprise.

Do you recognize the voice? This is one of the hackers working on porting CyanogenMod to the HP TouchPad. He shot all those videos, too.

Bookeen to Launch Solar-Powered eReader in 2016

LibraryBox Enters Public Beta, Offers a New Tool for Managing Your eBook Library on a Network

Inside the Kobo Vox

Mind boggled. Really. Wondering what it would be like to type on an eInk screen now.

Well, if Softmaker Office ever gets out of Beta it would give you an office suite to use the keyboard with.

Sweet. Can’t wait for a non-jailbreak version of this for the Kindle + roll up keyboard.(particularly the Kindle Fire, which is great for traveling with.)

Kindle doesn’t seem to have the hardware, so unless you’re ready to open the case and fire up the soldering iron, it’s not going to happen.