Nook Media has shown every sign that they were getting out of the ereader business, but if today’s rumor is true then they’ll be leaving a gift behind as they go out the door.

TechCrunch is reporting that the Nook Touch and Nook Glow will be getting an update sometime next month:

An upcoming update will bring a web browser, email and update store app to Barnes & Noble’s super affordable Nook Simple Touch line of e-readers, which will begin rolling out June 1 according to a source close to the matter who wishes to remain anonymous. The 1.5.0 update was created in response to the positive critical and customer response to the recent Nook tablet update that brought Google Play to B&N’s Android-powered devices.

Do you think it’s true?

I’m still waiting for sources inside B&N to confirm this, but as it stands I don’t believe the rumor – even though TC does have a screenshot to back of the story. Sorry, but it would be easy to fake this and send it in: 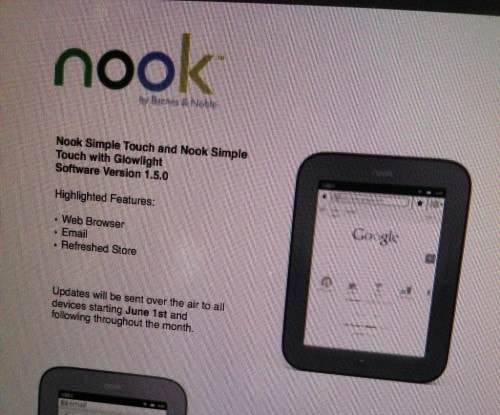 The reason I disbelieve this rumor is that Nook Media has shown every sign that they no longer wanted to sell ereaders. That is my explanation for adding Google Play, an update which changed the Nook HD from an enhanced ereader into an Android tablet. That is a marked difference from this rumored update which would turn the Nook Touch from an ereader into an ereader plus.

I also think Nook Media passed on using the 6.8″ screen, and don’t forget that Nook Media’s current pricing policy suggests that they are clearing out existing Nook hardware at a loss. In fact, several retail partners no longer carry the Nook Touch or Nook Glow.

If Nook Media is getting rid of Nook ereader hardware then does it really make sense for them to invest time and money in a new firmware update for a soon-to-be dead device? And we’re talking about a 2 year old device, at that.

I doubt it. What do you think? 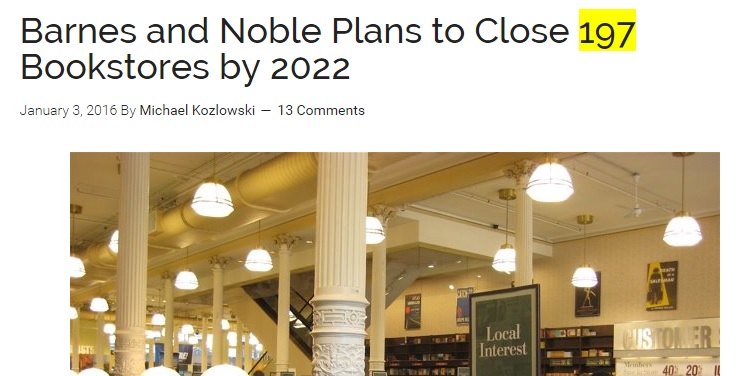 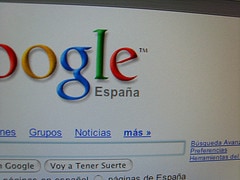 Maybe the firmware existed long ago, but didn´t want to release it. But now they are more interested in clearing out inventory, so don´t care.

An update that adds value might be an attempt at a graceful exit to the hardware biz.
Or, for all we know, in-house mavericks had coded the apps ages ago but senior management blocked the release.

The real question is whether the new firmware blocks the hacks. 🙂

At a minimum, anybody who raided Radio Shack recently should make sure the things are current as of now and then wait to see what happens after June 1st.

"The reason I disbelieve this rumor is that Nook Media has shown every sign that they no longer wanted to sell ereaders. That is my explanation for adding Google Play, and it also explains the recent clearance sales. I also think they passed on using the 6.8? screen, and don’t forget that Nook Media’s current pricing policy suggests that they are clearing out existing Nook hardware at a loss. In fact, several retail partners no longer carry the Nook Touch or Nook Glow."

Well, yes, but by that logic, why should they have wanted to add the Google Play update either? They did and they might do this update too; if you look at the people who bought their devices, it’s their main customer base, the people who go into B&N stores. These are people who have a longstanding relationship with the brand. It doesn’t make sense to piss them off. Perhaps some will feel put out buying a device and then having the comppny drop the platform; dropping a few gifts for your users on teh way out will help keep from pissing them off.

As for this update, I was anticipating something like this. The Simple Touch always could do more than management let it; many of its functions were locked down. I thought to myself, if worse came to worse, that they could just unlock the web browser, add access to apps, and turn it into a low, low cost tablet, in order to goose sales.

You beat me to it. I was thinking the exact same thing. If they updated the Nook HD because they are getting out, then it makes sense they update the other readers.

Let me clarify my point.

I think there is a difference, but I could be wrong.

Hoffelder makes some good points here. Anyone think the leak was a ploy to boost sales as B&N cleared out the devices so that their loss would be minimized? The idea might have been that the devices are already outdated, but with the new functions, maybe enough people would become interested enough to buy the surplus at reduced prices. By releasing the information as a leak, the company wouldn’t actually be responsible for providing the update. Why else would anyone want to fake the memo?
Sadly, the trick worked on me.

The capabilities of the rooted NST are so great, that this update would not change anything. I suppose, they do not plan to update Android to 2.2+.