Nook2Android Cards Turn Your NookColor into a Sub-Standard Android Tablet 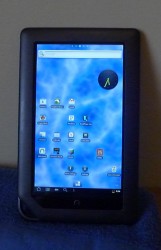 You probably know that underneath the NookColor’s locked down ereader like exterior lies the heart of a decent budget tablet. Getting that tablet out can take a fair amount of work and a lot of technical skills, but if you don’t have the skills (I don’t), you can always go looking for one of the services that will do it for you.

The N2A card launched last summer to provide just that service. This is a microSD card which you can insert into your Nook Color or Nook Tablet in order to change your ereader into a tablet in a single step. I didn’t report on the card much last summer, so I’m making up for that deficiency today.

The N2A card helps you run CyanogenMod, the open source Android firmware. It’s quite popular, runs on many Android devices, and has the support of a sizeable development community. This card comes with a bunchaton of apps, including Android Market as well as the full suite of Google apps (what isn’t included can be downloaded).

Much to my delight I was offered a free card earlier this week, so I of course installed it in my NookColor refurb and brought it with me on my trip.

I brought my NookColor with me to Boston because I wanted to test it.  While I’m mobile I rely on my Android tablet far more than when I am sitting at my desk, and I’ve found there’s no better way to find the limits of a tablet than to use it in place of my original Samsung Galaxy Tab as a work tool. Any tablet that can stand up to my moderate needs for reading, web browsing, Twitter, blogging, and following RSS feeds is at minimum a very adequate device. If it’s cheap enough it goes from adequate to excellent (depending on the price). 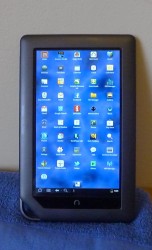 Alas, N2A doesn’t make the cut.  As an Android tablet it comes a distant runner up to any and all of the budget tablets I’ve tested in the past few months. It has one huge defect that renders it unsuitable for me.

Battery life sucks. While any of the budget tablets will usually last a full day (or at least come close), when my Nook Color is running on the N2A card it didn’t even make it ’til noon.  That is simply unacceptable. What’s more, I’ve also had the touchscreen go dead on me no less than 3 times today. That’s an issue I’ve never seen before, and each time it happened I was forced to reboot the NookColor – costing me all the apps currently running.

But that’s just me, and the issues I found might not be a reason for you to avoid this card. I’m looking at how well it works as an Android tablet, and the answer to that is poorly. But if you already have a Nook Color you are probably thinking about how you might get more out of this locked down ereader you own. You might even have already decided that you preferred an Android Tablet over an ereader.

In that case you might want to consider the N2A card. If you already have funds sunk into your NC and you’re not satisfied, the N2A card might add enough value to make the $35 price tag worth it. It’s certainly a better option than getting rid of your NookColor.

Huh. I installed CM7 on my Nook Color refurb immediately after I received and registered it. I used my own microSD and the directions from, I think, Lilliputing. It gets much better battery life than what you mention above.

I’ve read other comments about poor battery life with N2A, though none were as bad as mine:

This is something I confirmed before I posted.

So maybe it’s a weirdness of the N2A card specifically?

Glad I didn’t go that route, then! I did consider it. 🙂

I have had my card for a couple of months now; whereas I like the additional features it allows, I too experience horrible battery life, daily freeze occassions and I must "force close" often. I have attempted to read up on ways to correct these problems but my very limited tech knowledge has caused finding solutions to be a drain on my time. With all of that said, I would still recommend n2a to the more tech knowledgeable consumer.

I am so sorry to hear your experience with our Nook Color card was sub-par. This is not the typical user experience. The fact that your touchscreen went dead three times tells me that your card may be defective. We will ship you a replacement card immediately. In the meantime we have an FAQ about battery life that may help.

Hey my nook color after about a month now of using the n2a card it is now just spinning on the logo and not doing any thing just wondering if there is something on y0u’r website that could fix that for me.

Yes, we have an upgrade/repair you can try that usually fixes the problem. Please contact our support team at n2acards.com/support for the proper instructions.

What I love about the N2A for my Nook Tablet is the access to Kindle books. I’m not a sophisticated Android user, so having the Nook and Kindle libraries, plus my email and other web reading, is very adequate. Have not had your reported battery problems, though the Android option sometimes loses wireless access; then I release the card, switch to Nook, get online, push the card back in, and carry on. A small price to pay for so much convenience.

Wonder if it’s the Nook itself? Bought a refurb, with the N2A card, and the device did the same thing and would reboot constantly. Replaced with a new Color, got a new card and no issues at all

We have twoN2A Nooka in our family, and have never had any of the problems mentioned. Both work as well as other tablets I’ve used. Perhaps it is a glitch in the card. Glad to see the N2A folks continue to come thru on customer service, not that we’ve ever had to use them.

I’ve had the N2A card installed in my Nook Color since late last August, right after I got my Nook Color. I’ve never had the touchscreen go dead, but I do notice the battery use. On the other hand, when I boot into Nook Color mode, the battery doesn’t really last much longer then, either. It seems to have more to do with being connected to a wifi network than something about the N2A card. The multitude of apps available from the android market (and Amazon) make the card well worth the money, in my opinion. What would really make the Nook Color better would be a way to attach a camera.

Wow! I have used my N2A card on and off for almost a year and have had no troubles like you are describing with the screen.
I have found an app will drain the battery quick but have generally had good battery life especially after deleting said app!
Actually, after the last software update from B&N the battery life with the N2A card or running stock B&N seems much better than before.
My NOOKcolor was purchased new Nov of 2010.

I just wanted to follow up with you and make sure you received your replacement card. If so, is it working better than the last one did?

I’ve had the same battery and screen locking issues as described in the review, only worse. I’ve all but given up on this thing, which is a shame, because I really loved the functionality.

I have had my N2A card on my Nook color for about a year and had not had any problems. It is now starting with a force close about once per use. It’s annoying, but not enough to give up on the card. It has made my Nook a full blown tablet. I use it all the time with a keyboard and really love it. I would get another one in a minute.

I recently purchased a NR Card ( www.nookrootedcards.com ) it is the same thing as a N2a but more cost-effective. The Android OS runs stable on my Nook Tablet 1.4.3. So far so good, I have not noticed any battery issues yet.

I recently purchased one of the n2a cards but i never received it. I have been trying get in contact with this company but no response. I have placed many tickets and heard nothing. Im starting to think that this is a scam

I bought my n2a card in feb this year…great functionality BUT battery life pathetic. I have downloaded a couple different battery applications as well as app managers to kill constant background app running. Wiith the battery at 100% battery life drops down in minutes. It has never run properly. Big mistake buying it would not recommend. Better off with actual android tablet. N2A needs to fix this major problem.

I’ve had my Nook Color for about 18 months & got the N2A card a year ago. Absolutely love the N2A card so much & having the functual tablet experience. I use it all the time, e.g., daily devotional, bible app, checking my email, my calendar & reminders, etc. But now, lately the screen freezes several times a day (screen unresponsive). Now it so bad that even when I reboot it refreezes before I can even type in my security code. My Nook Color side works just fine but I cannot use the android side at all. Is there anything that will fix this? I can’t afford to replace it.

I just purchased th n2a sd for my new nook hd…put, sd in…doesn’t open to android mode 🙁 I am not sure if others have had issues since it is a new product…I put in a eticket…hopefully someone will call…very hopeful. Looking forward to using this product…

The N2A cards haven’t been updated to work on the Nook HD yet. There’s a card for the HD+, but that’s not the same thing.

Just bought the n2a card not working, did all the troubleshooting & got a new one my nook not. Doing anything Help!

Since buying the n2a card, my nook color is so slow, Can I do about it? Also… to the person that never got his card. … my card was shipped to the wrong house. Thank God the gentleman was honest. Or I would be in the same boat. My nook also force closes about once per use. But only apps. Not my reader. I love it. But my wife always says you get what you pay for. And she is correct. If I wanted an Android tablet, I should have looked into some of the new cheaper one. They have some windows operated that are very cheap under $250. I’m not sure how much bastard the processor would be but for what I have I am happy with. Good luck to all of you it probably I was just wondering if everybody would experience the lag time that I am.