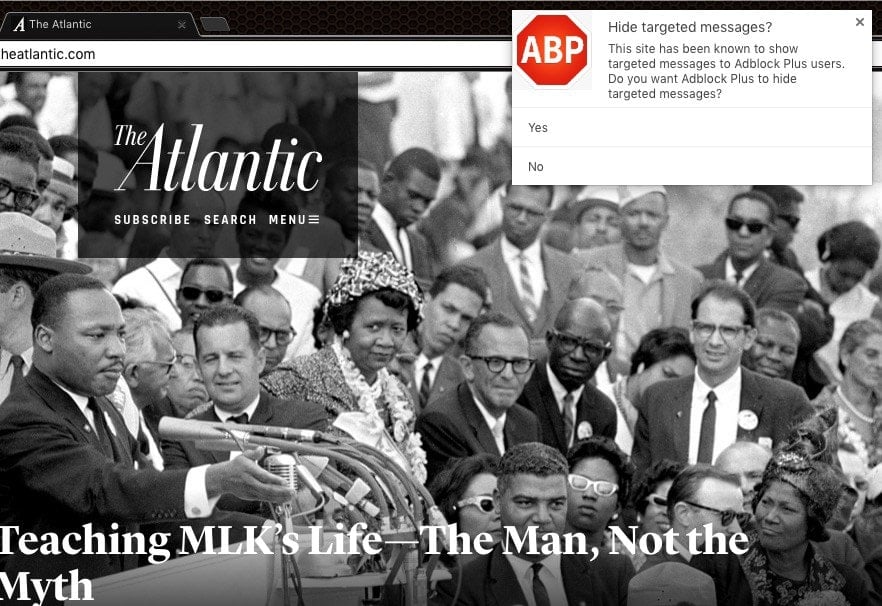 Some web publishers have responded to the rise of ad blockers in the past year by installing nag screen pop-ups to ask visitors to stop blocking ads. Some, including Forbes and the Washington Post, are taking a hard line approach of blocking access, while others like CultofMac and this blog simply ask visitors to turn off their ad blockers.

Those nag screens were a good idea but they’re not going to be viable in the long run. Digiday reports that Adblock Plus is proactively blocking the nag pop-ups, and instead showing users a message like this: 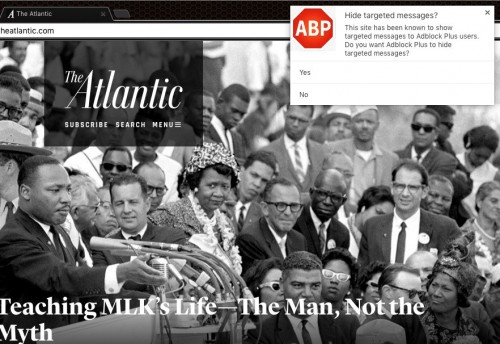 The help message is reportedly only showing up in Chrome, and not the Safari version of Adblock Plus. I haven’t seen it myself, but I have heard reports from readers, and according to Digiday:

The Atlantic is the only major publisher on the “Adblock Warning Removal List,” a list that lets AdBlock Plus users automatically hide messages on any site that targets them with special messages. But other publishers could find themselves added to that list if the community that manages it deems their messages too obtrusive.

I am subscribed to that removal list, but I’m not seeing either the help message or the nag pop-up when I visit The Atlantic (perhaps it’s being blocked automatically).

The developer of Adblock Plus has confirmed the feature exists, but is not widely implemented and that it’s not being used against very many sites. It’s only being used against the more obnoxious nag screens on the more popular sites, Eyeo communications manager Ben Williams told Digiday. For example, The Guardian’s “more subtle” call to disable ad blockers, or Pornhub’s similarly subtle request, were not added to the list.

And it would also appear that some sites are getting around the block; CultofMac, for example, has a nag pop-up that appears every time I visit.

But in spite of the selective and imperfect implementation, some web publishers are upset that Eyeo is preventing them from even asking visitors to turn off the blockers. They see that as part of a soft campaign to explain to readers that while an article may be free to read it is not free to create.

“I really don’t understand it,” said Jeff Burkett, senior director of ad innovation at the Washington Post. “Those conversations are about communicating the value exchange between readers and publishers. They shouldn’t be threatened by the fact that publishers are trying to have that dialogue. It makes it seem like they have ulterior motives.”

Well, I see the pop-up as part of a soft campaign, but I have to say that Burkett sounds about as disingenuous and myopic as some complaints about the use of ad blockers.

Eyeo is a company that is built on the idea of improving a user’s web browsing experience. Do they really need an ulterior motive for blocking nag pop-ups, when their core principle already justifies that act?

I’m pretty sure this isn’t a new feature.

I don’t want to have a conversation with a website.

@ puzzled It’s less a conversation than a lecture, I think.

No one is forcing you to go to their site. Lemme guess…a millennial? Expects everything for free?

Even if a blocker warning popup isn’t taken out automatically by a master list, it’s just an element on a web page, and most ad blockers include element blockers. A simple right-click or two and the popup is gone forever.

There’s also a Greasemonkey script called [fornicate][fornicate]adblock that does effectively the same thing. I tested it myself and it blocked TeleRead and TDR’s nag screens.

You’re right Nate. It is a lecture. But in the long term it’s the end users who will lecture the publishers, including you (we’ve chatted about that in the past).

Eyeo will unblock these pleas if your willing to pay them.. Iv moved on to other adblockers because I dont agree with how Eyeo picks and chooses who it blocks