Notion Ink’s much hyped Adam tablet is back in the news today with new buzz about a new model being released (again). Let’s hope this round of leaks amount to more than the hype and hot air from the last time around.

Engadget is reporting that they have their hands on a new brochure for the Adam II. This tablet, which was originally announced over a year ago before vanishing into vapor, is expected to launch soon in India.

According to the brochure (and press release), the new Adam II is going to run the latest version of Android 4.2.2 on a dual-core 1.5GHz CPU. It will also have 1GB of RAM, an unstated amount of Flash storage, a pair of 2MP cameras, Bluetooth, Wifi, and HDMI out. Based on the images in the brochure this is going to be a very slab-like tablet: 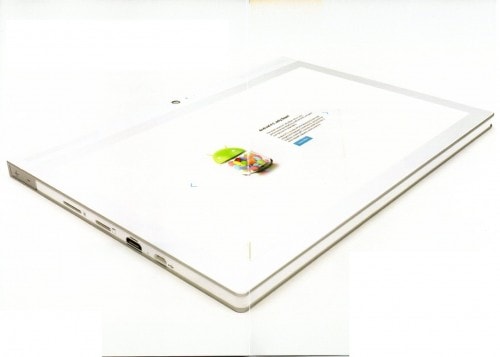 This is also going to be a dual-screen device, with a 10″ display on the front and a small secondary display on the spine. This matches with a rumor that TheNextBigWhat reported a couple days ago. That story was thin on specific details, but it did mention that the Adam II would have 2 displays.

The 10″ screen will use an IPS panel with a resolution of 1280×800, and it’s not clear what specs the secondary screen will have. According to the brochure the second screen will be using an STN screen (an old monochrome type of LCD), but that could well change before the Adam II actually ships. But there is an image in the brochure  that gives a hint that the smaller screen is intended for basic info like notifications:

Battery life is expected to be 10 hours. There’s no word on the US retail price, but the press release does state that the Adam II will launch in India with a retail of 12,000 rupees. That is about $219.

I would suggest that you take that price with about a pound and a half of salt; Notion Ink doesn’t exactly have a good track record for releasing products on time. Remember, the Adam II was originally announced in January 2012 before disappearing into nonexistence.

And the first Adam tablet also had a fair amount of trouble with hardware and software. The screen never lived up to the early hype, and due to development delays Notion Ink was forced to ship the Adam without several key apps and features.

Speaking of the screen, the original Adam was the first major consumer product to use a Pixel Qi screen. This screen was offered as an optional upgrade when the Adam was launched but was later dropped. User reports indicated that the screen was blotchy and not ready for prime time. The negative attention would likely explain why the Adam II is using a more tradition IPS panel instead of a Pixel Qi screen.

There is absolutely no more trust for Notion Ink. What a joke. What started out were some great ideas. Too bad they never figured out how to really finish the job. Product problems were never addressed. Claims were made and never followed through. Basically everyone got an alpha product, and I’m being very generous at that.

The camera was a POS. The software was subpar, latency on the touch screen was almost comical. Instead of addressing the software, they made a bunch of promises and basically just gave up and I guess started working on Adam II. All of us Adam I owners following the blog for fixes and help were like "what the hell!?"

I felt so swindled. And my screen worked fine! If anything I was lucky with the unit shipped to me. Still such a waste. I feel bad for anyone who ordered one. Getting the first iPad (at the time) would have been a much better decision. At this point, if somebody is a electronics hacker, that is the only type of hands the Adam belongs, somebody who can tear down and repurpose the hardware in interesting ways.