For the past several years Nvidia has come to CES to announce a new chip which made their earlier chips look like child’s toys, and once again they’ve pulled it off. Last night Nvidia unveiled the Tegra X1, a chip which they describe as too powerful for a smartphone or tablet but just right to run the computer in your next car. 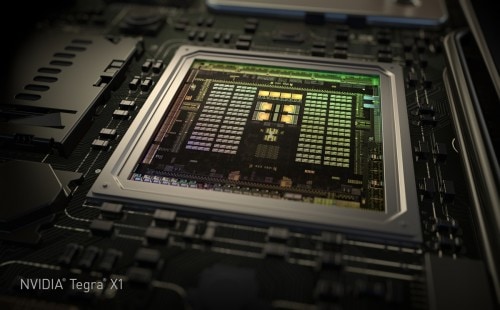 Sporting 256 GPU cores and 8 CPU cores, the Tegra X1 is powerful enough that it can display 60 frame per second video at 4k resolution.  And to be clear, that means that it can play a video with a resolution of 4,096 x 2,048 at a speed twice as fast as is standard for movies.

Nvidia says that this is the first mobile chip to pass the teraflop threshold. If you ask me, it’s crazy to even make such a chip for mobile devices; the cost of a 4k resolution screen is simply too high for there to be too much of a market.

And then there’s this issue:

Love NVIDIA but how many apps even maxed out the K1 chip last year? Exactly.

But Nvidia has made the chip, and they want to put it in your next car (but not mine).

Along with the Tegra X1, last night Nvidia unvelied two new in-car platforms.  The first is an in-car computer system called Drive CX, and it is expected to be able to run cameras, a center console entertainment system, and the instrument system simultaneously. Nvidia says it can drive two 4k displays at 60Hz or four high-definition displays – effectively giving each passenger their own HD video experience. 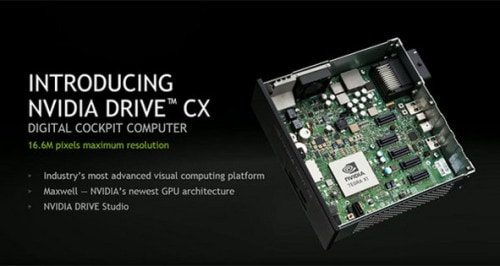 The  Drive CX can run QNX, Linux, or Android software, so auto-makers can choose their platform and customize the dashboard. The unit shown off last night ran on Nvidia’s reference platform,  Drive Studio.
But Nvidia’s other cat computer platform did not. In addition to running an entertainment system, Nvidia’s other idea for the Tegra X1 chip is to use them in  self-driving cars. The Drive PX uses a pair of Tegra X1 chips to take the input from the multiple camera and sensors in a self-driving car and recognize what is happening around them – even when it’s not something in the car’s database.

GigaOm reports that the Drive PX demo was shown as being capable of classifying between 5 and 10 objects and yet still having power to spare. The system was said to only be operating at 10% of its capacity, and could recognize 150 or so objects, with about 30 classified per second. 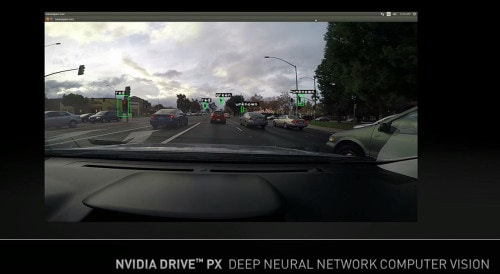 What Nvidia is trying to do with object recognition is not new; it’s been done in labs for a couple decades now and it’s so easy that it is assigned as an undergraduate project. It’s even been tried outside of the lab; for example, Darpa has been running an autonomous robot race (the Grand Challenge) for nearly a decade now.

But just because they run a race doesn’t mean that self-driving cars are ready for the real-world driving conditions.  As this video from Jalopnik shows, self-driving cars still can’t cope with even a little rain. They struggle to understand what they are seeing (an area where the Nvidia X1 chip can help).

I was initially skeptical about the intended uses for this chip, but it now makes a lot of sense.

Given the media abilities of the Drive CX system, it’s going to be an easy sell to car buyers (the added cost is less than buying several tablets for several kids). And as for the Drive PX, autonomous autos are coming sooner or later. The current limitations are how fast the car’s computer can respond, and even if the Tegra X1 chip isn’t powerful enough it has come closer than any other.

[…] been over a month since Nvidia unveiled its latest cutting edge CPU, the Tegra X1, so it should probably come as no surprise that rumors are circulating that the chipmaker is going […]

[…] latest CPU has far more graphics ability than you could possibly use in a tablet, which is why Nvidia's next […]