I have long taken the position that I don’t turn off my gadgets while on an airplane, and it looks like I’m not the only one. A new report was released this week  by the Consumer Electronics Association, and it showed that nearly a third of airline passengers forget to turn off their gadgets.

And that’s the least of the bad news in the report.

The report is based on a survey conducted in the middle December 2012, during the peak Christmas travel time. the survey showed that a full 21% of respondents don’t actually turn off their gadgets  during takeoffs and landing but instead switch their devices to airplane mode, with another 5% indicating that they sometimes turn their devices completely off. Just over half the fliers that responded to the survey (59%) said that they actually turn their devices completely off.

If you add up those 3 stats you might note that there is another 15% unaccounted for. I’m given to understand that group was unsure whether they had turned off their gadgets, with about 1% reporting that they hadn’t brought a gadget with them while traveling in the past 12 months.

And to make matters worse, 30% of fliers reported elsewhere in the survey that they sometimes forgot to turn off their gadgets. About 2/3 of the respondents never forgot, with the rest not sure whether they always remembers to shot down their devices.

Do you realize what this means? 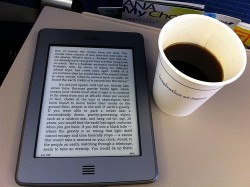 Is this a weapon of mass destruction?

Now I understand why air travel has died out, and why every flight in the past few years has crashed. The actual compliance rate for this particular regulation is 59%, or to put it another way 2 out of 5 airline passengers are either intentionally or inadvertently committing acts of terrorism.

Yes, it is that bad, but luckily I also have a solution.

I think guns should be issued to flight attendants so they can summarily execute anyone who leaves a gadget on during the critical parts of a flight. It’s clearly the only way to make sure we’re safe. And just to be fair, the folks who forget to turn off their gadgets should be executed twice.

Sorry, I can’t be with you on this one. I’m one of those who rarely turns devices off, and I have accidentally forgotten to put my phone in Airplane Mode. Because I’m just waiting for the exciting day when my Kindle crashes a plane.

I turn my iPhone off, but I just close my Kindle.

I was flying the red eye from Seattle to Detroit a few years ago. The plane was landing at dawn on a Sunday which was 3:00 am Seattle time: and my Atomic watch started to sync time. There is no off switch on the watch, though there probably is an off switch for the sync feature if I would ever bother to learn it. The plane didn’t crash even though my watch was actually using a telecommunications feature.

Where is the ban on atomic watches? The stews reading a list of devices you can’t use, but watches aren’t mentioned. Is a Kindle with WiFi or 3G turned off more dangerous?

Whenever this topic comes up I always think of this:

I was once on a flight that got held at the gate because the flight attendant didn’t understand how e-ink worked and refused to let the plane leave until the screen on my kindle was blank. She kept telling me that the plane wouldn’t leave until it was 'turned off', and threatened to throw me off for not doing as she said. Of course multiple other passengers also had kindles, and volunteered as such, so instead of throwing me off the plane for 'refusing to to comply with the orders of the flight crew', the entire flight was held up.

It took myself (PhD. physics), 2 professional engineers (MSEE and MSCE), a guy from amazon who said he helped design the kindle (I am not sure if this was true or not), and finally her own boss and an FAA representative with an EM probe to finally convince everyone that, indeed, the kindle would not crash the airplane in idle mode, where, of course, it gives off exactly no radiation because the page isn’t being turned (this was a gen 3/kindle keyboard, so no touch sensors). 1.5 hours later, the plane left. From what I understand JetBlue issued a big memo after that to all their staff about how e-readers work.

Wil Wheaton has had a similar experience:
https://plus.google.com/+WilWheaton/posts/67GbHxjDTsn

Nate, Nate…
Shooting guns in an airplane is bad news.
The flight attendants need to be issued garrotes.
No chance of ricohets.
And much cheaper.

Since you don’t turn your devices off does that mean you volunteer to be shot first as an example for the rest of us?

After all, I was trying to bring the plane down in a fiery accident.

Just another sad example of the state of our society today. The rules don’t apply to me, because I’m special. Pathetic.

I do not see how you can interpret my mockery as a belief that the rule shouldn’t apply to me because I am special.

It isn’t always about you Nate. :p It was in reference to those who do not comply with the instructions to turn off devices. About 40% according to the survey you referenced.

Reporters (not Nate in this situation) do everyone a disservice with they say things like leaving an electronic device on might crash the plane. That’s not going to happen and just stokes contempt or hysteria. What could happen is a rogue device somehow interferes with a sensor on the plane and that leads to a crash because the pilot mistakenly trusted it during an emergency.

Technically it’s possible to test for rogue devices, but I guess it’s just easier to have everyone turn all devices off. I hope people at least turn off wireless transmitters as these often use the most power and are most likely to cause interference. I’d be surprised if a Kindle puts out much of an EMF. Same with anything in standby.

An atomic watch can be powered by a tiny solar panel and tiny battery and doesn’t transmit so it’s no surprise people aren’t worried about them.