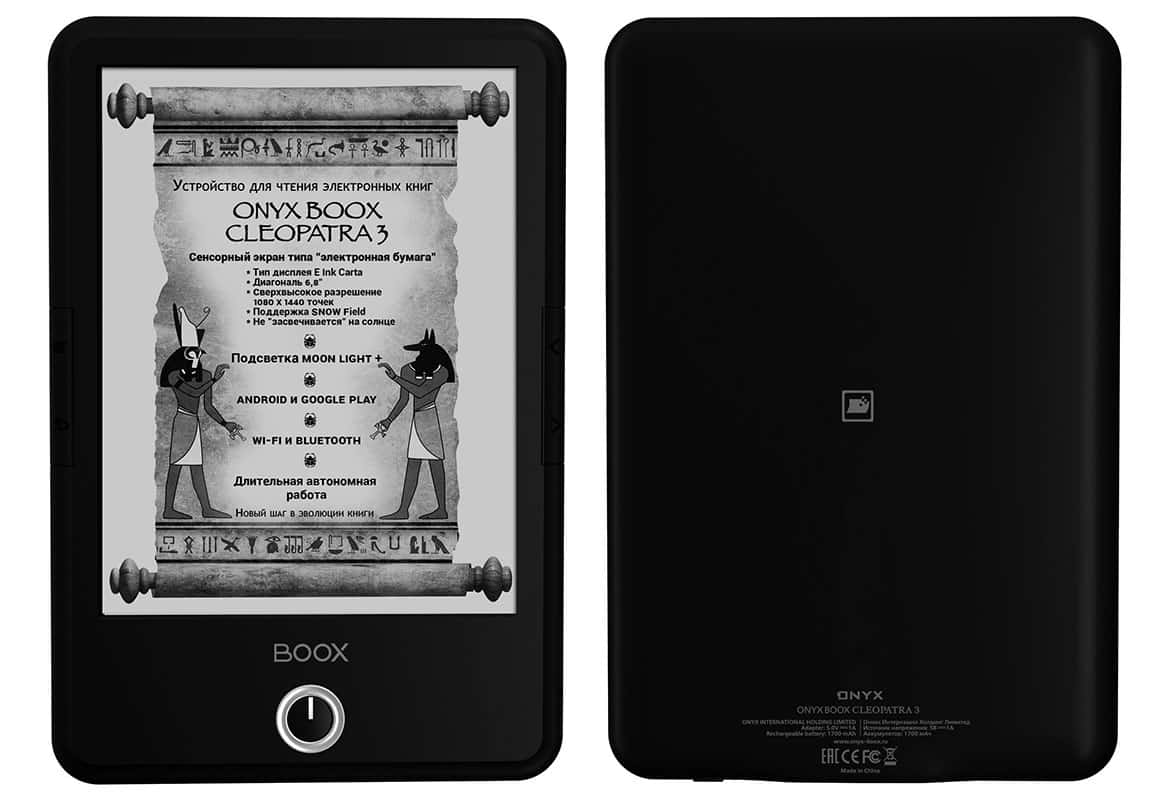 The color-shifting frontlight concept that Kobo pioneered on the Aura One has now made its way to Onyx ereaders. 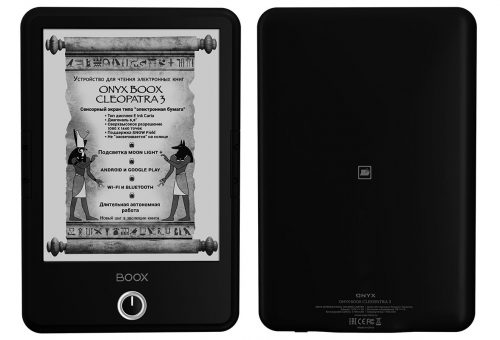 This ereader is launching today in Russia with a retail price of 14990  rubles, or $247 USD. I am still trying to confirm the details about the frontlight, but I can tell you more about the rest of the ereader.

It runs Android 4.0 on a 1GHz Freescale i.Mx6 CPU with 1GB RAM. It’s 6.8″ Carta E-ink display has a capacitive touchscreen, the aforementioned frontlight, and a screen resolution of  1440 x 1080.

This ereader has 8GB internal storage, a microSD card slot, Wifi, and Bluetooth. It measures 9mm thin, weighs 236 grams, and packs in a 1.7Ah battery.

It also has rather useless page turn buttons on either side of the screen (seriously, don’t bother) as well as a d-pad below the screen.

Coincidentally, there is no mention of audio support, a feature which can be found on the almost identical Onyx Boox T76 plus sold on Banggood. The T76 plus is about $45 cheaper but does not mention a color-shifting frontlight (otherwise I would tell you to get that model).

All in all, the Cleopatra 3 is a tempting ereader – if the frontlight performs as promised. It is a slightly more open, slightly more expensive alternative to the Kobo Aura H2O (2017).

It’s a pity that it runs such an old version of Android, though.

If you get one, let us know how things turned out.

Sometimes it’s not you – It’s the app

The Kobo is priced at $200 *Canadian* which is $160 US if you buy it from a Canadian vendor in the US. That’s $90 less than this and offers the convenience of a dedicated OS that offers instant return to the book from sleep (and a bunch of other features).

Combine that with an easily-accessible repair center (God knows what you’d have to go through with Onyx) and Kobo seems to be the overwhelming choice UNLESS you desperately need SD card storage. In fact, an American could buy the Kobo H2O2 AND a Kindle Fire HD8 tablet for the price of the Onyx.

So yes, it' not that much more expensive.

"Combine that with an easily-accessible repair center"

I have dealt with Kobo before – don’t make me laugh.

Having had to return my Kepler Pro for warranty repair, I can tell you "what you’d have to go through with Onyx" — and it wasn’t anything particularly scary (once I convinced them that the problem (i) wasn’t caused by mechanical damage on my part & (ii) wasn’t user-solvable).

I rather suspect that Kobo’s "repair center[s]" are rather less "easily accessible" outside North America.

And having recently upgraded to an Android-based eReader, I can tell you how wonderful it is to have a wide *choice* of reading apps, rather than having to endure the idiosyncrasies of whatever app the "dedicated OS" comes with. It also comes with "instant return to the book from sleep" (which is pretty much the norm with Android).

I don’t understand why Onyx are over-pricing their e-readers (this applies to the full range of their devices.