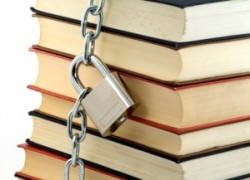 If you’ve ever looked at your library’s ebook selection and been disappointed, I think I just found out why.

Sarah Houghton has just posted a fascinating expose over at Librarian in Black. She’s uncovered evidence that OverDrive has been less than upfront about what ebooks they can sell to which libraries, and why.

Sarah first learned of this problem when a fellow librarian came to her with a puzzling complaint.His library had just gotten an account with OverDrive, and they were just starting to build an ebook collection.

Their first step was to create a list of ebooks they wanted and then compare it to nearby libraries and see if it was missing anything. Much to their surprise, there were ebooks they expected to be able to buy but could not. Those ebooks were already in the collections of the nearby libraries.

After not finding any info online, they contacted the OD rep. That rep eventually admitted that the restriction came from that library’s policy for issuing library cards.

You see, the Chesapeake Public Library  maintains a reciprocal partnership with a number of surrounding libraries. This means that patrons can take their library card for this system and use it to check out books (and ebooks) in another system. The CPL also lets patrons get a nonresident library card at $35 a year ( for those who live outside the region). Another example of a reciprocal policy would be the Fairfax County Public Library System. I don’t live there, but I have registered my library card (from another library system) in order to check out books from the FCPL. This is a fairly common policy for libraries.

Apparently some publishers object to this, so OverDrive has been forced to restrict the ebook selection.  If a library has a generous library card policy they are denied the chance to see the same ebook selection as libraries with a strict policy.

It’s a bait & switch, folks, because OverDrive never actually told anyone about the limitations. There’s a vague mention in the contract, but this wasn’t mentioned on any of the support pages.  OverDrive enacted the restrictions and hoped no one would notice that OD wasn’t going to sell them all the ebooks that OD carried.

Sarah and her friend didn’t know about this until they really started investigating. Sarah also couldn’t find any other librarians who knew about it.

Unfortunately, there’s not much anyone can do about it. OD really didn’t have a choice here. They can only sell ebooks under the conditions applied by the publishers. It’s really not their fault that some publishers are being unreasonable.

P.S. I’d recommend that you check with your local librarians. They would probably like to know about this.

Hopefully someday this whole system gets fixed. Not impressed with OverDrive at all.

We have a liberal policy according to this article. Is MCLD the same way?

Why do the libraries even have to go through over drive?

[…] last week I posted about OverDrive’s latest faux pas, and today they posted a response on their […]

Yes, the publishers are behaving badly by not allowing their ebooks to go to libraries with more loose distribution policies. But the root of that problem lies in this absurd buy-to-rent system. Selling to those who rent only makes sense if:

1. There’s a substantial cost of production, as with cars.

2. The item rented wears out, sticking the buyer with something that needs replacing every decade or so.

Neither are true of ebooks. Once one copy is created, the cost of production is essentially zero and it never wears out. And in that case, the sell-to-rent business model makes no sense.

What these publisher should do is distribute their ebooks as widely as possible. Every ebook to every public library in the country should be their goal. And their profits should come exclusively from rental fees every time a book is checked out, with those rental fees kept deliberately modest. The rental fee for an ebook should be less than the cost of transferring a printed copy between branches.

Yes, publishers would make less money in the few months after an ebook is released, but they’d make that up in the long run with a steady income from all those rentals. They’d have everyone one of their books in virtually every public library in the country.