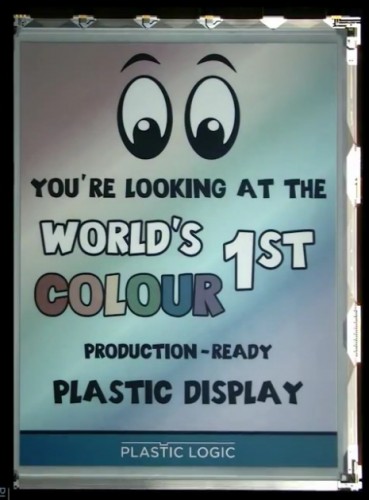 This screen tech company might not be planning to make their own screen anytime soon, but they do know that flashing lights and bright colors are the way to get the attention of bloggers, so they’ve released a new video.

They’re calling this a new screen, but the email I got wasn’t clear about the changes. Given that PL unveiled a flexible color screen back in May, this one might only be new in that it was recently produced. Still, ooh pretty.

PlasticLogic will be showing off the screen in a couple weeks at the SID Organic Electronics tradeshow. This kicks off in London on the 17th and 18th of September.

Hugh Howey to Debate "Will Amazon Lead Us to the Golden Age of Books Next Week?" in NYC

Either they picked images with a limited palette or that screen turns all images into limited palettes of colors. Still, looks better than eInk Triton.

Yes, it does look better than Triton.
The limited pallete may be a function of the screen color depth rather than the images.
The screen might only be 16-bit color (64K) or even 12-bit (4K). Saturation looks "good-enough" though it obviously isn’t travel-magazine ready. 🙂
Of course, demonstrating they can do good color on a reflective screen (presumably under strong floodlighting 😉 ) is no guarantee the tech can be mass-produced at a price that can compete with LCD.

If this tech works as good as they imply it may not have to compete with LCD. It could be used on a premium Tablet as long as what I assume is a extraordinarily long battery life and nearly impossible to break screen are seen as something consumers want.

Think about the difference of plugging in your tablet after 6 to 8 hours of use (even this is a stretch for most of the devices on the market) versus 2 to 3 weeks. Just think of the commercials with a guy hitting the screen with a hammer (or in some cases dropping some keys on it) and then picking it up and using it.

Anyone have any idea what it weighs? I assume it does not use glass so it could come in significantly lighter which would be another bonus.

Of course it is all rumor and conjecture until someone actually builds it.

Of course it cannot compete with LCD. It’s silly to even expect it to. And unfortunately a premium-priced ereader cannot survive under current market conditions, which frustrates me a lot. I would dearly want one.

I agree that with how e-reader prices are dropping, an e-reader cannot survive at a premium price. In the next year or so, prices will drop further.

I wonder if there have been any electro-wetting advances? Haven’t heard much about that recently.

It all depends on what you define as a "premium" price.
Could you sell a premium-priced eink reader? Sure, as long as premium isn’t defined as "a lot higher than LCD tablet". You might be able to get away with equal or slightly higher pricing on the strength of lighter weight and better battery life but at that point you need to be in color and well-nigh indestructible.
This Plastic Logic panel might work in a $300 reader.
But I’m pretty sure nobody can build a reader like that they could sell at $300. or even $400.