Logic has been teasing us since February that they had a flexible OLED screen under development, and last week it left the lab and appeared in public.

MyPrintResource is reporting that Plastic Logic’s newest OLED prototype was on display last week at the Printed Electronics Conference in Berlin. I cannot find very much original press coverage, but the conference did release a photo which shows a prototype screen.

This screen is reportedly 4″ in diagonal, and it is described as having a resolution of 360 × 128.  While that is a low screen resolution, it’s not bad for a prototype which only recently left the lab.

Update: According to the email I got from Plastic Logic, this demo unit has a monochrome screen. 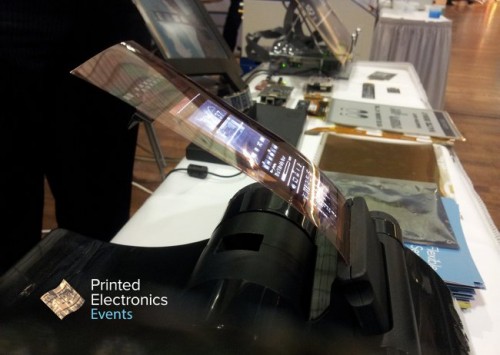 According to Plastic Logic, the 3:1 aspect ratio was designed to represent a smartwatch and to illustrate how the fundamental flexibility of their screen technology makes it ideal for the new generation of wearable devices.

No information is available as to when we will see this screen on a product, but I would not expect it to hit the market before 2016 at the earliest. This tech only just left the lab, and it should take at least that long to develop a design which can be mass-produced.

And while 2 years might seem like a long time for consumer products, the original research took even longer.

Plastic Logic has been working on flexible screen tech since it was spun out of the Cavendish Laboratory at the University of Cambridge in the year 2000. Their first factory wasn’t built until 2008, and their first product, the Que ProReader for business users, was unveiled at CES 2010 after several years of development. Unfortunately the Que never shipped; it was killed by the iPad, which cost less and did more.

The Que had an epaper screen which combined E-ink’s screen tech with a flexible backplane like the one used in the prototype OLED screen. After the market for ebook readers fell a part in 2010, Plastic Logic tried to revive their prospects with the launch of an educational ereader in Russia before turning their efforts to licensing their flexible tech.

Plastic Logic’s tech can be used to produce flexible circuitry, including flexible image sensors, and several partners have been announced over the past couple years.

Plastic Logic only announced that they were developing a flexible OLED screen in February of this year. They partnered with NOVALED , a Samsung subsidiary (a minority share, to be exact). NOVALED is a specialist in OLED screen tech, and it is their frontplane which is mounted on Plastic Logic’s backplane.

[…] Plastic Logic shows off a 4 inch, flexible, 360 x 128 pixel OLED display Know how to make a display tough to break? Make it flexible. Plastic Logic displays usually show up in eReaders, but this OLED screen seems to be phone-sized. [The Digital Reader] […]

I always feel like Charlie Brown getting ready to kick that football when I read a story about Plastic Logic.