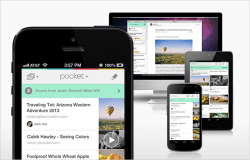 The save-for-later service Pocket is getting a lot of press today for a relatively minor feature that they’ve just added to the service. It’s called "Send to a Friend", and it is a redesign of the sharing menu which calls out the existing email sharing option.

Pocket has noted over the past years that users share far more content by email than by any other venue, be it Facebook, Twitter, or smoke signals. In fact, email accounts for two-thirds of the sharing in Pocket.

That’s why Pocket is going to make it easier to send emails to friends by offering your most frequent shares as individual options in the sharing menu. The newly redesigned menu will also adapt to a user’s most recently used services (Twitter, Facebook, Evernote, or Buffer)

TBH I don’t think that’s really all that interesting, but the new features for receiving the shared content are. Pocket has added a new inbox where a user can receive the content that other Pocket users send. They’ve also added enhanced notifications so that a user can choose to receive a push notification whenever they get a piece of shared content. Both of these features are great additions because they eliminate the need to check an external email client.

Pocket is now seeing around 35 million articles and videos being saved each month, far more than the 240 million items saved in 2012.