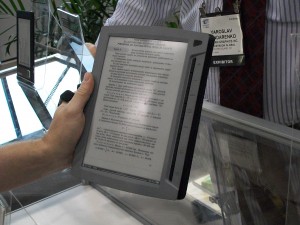 Yesterday I mentioned the Pocketbook 901. Rather than rehash old information,  I decided to dig up the following post on when I saw the PB901 at CES 2010 and repost it.

Note: The information in this post was current as of January 2010. It might be out of date now.

Update: Charbax shot a hands on video of the PB901 at Computex in June 2010. Surprisingly, they haven’t changed the design much (but they are quoting a lower price):

Pocketbook had a prototype 9.7″ ebook reader with the new flexible screen in its booth at CES. You might not be able to see it in the photos, but when I held it in my hands I could see the screen wasn’t flat. There was a slight bulge behind the screen from one of the circuit boards.

I asked, and I was told that there will be 2 models. The basic model (PB901) is projected to cost around $450 and be available in September. The PB902 will have Wifi and a touchscreen, and will be available later. Note that the one in the photos is not the production model. It’s a prototype that was thrown together quickly in time for a demo for the Russian Education Minister.

BTW, this isn’t the first mention of the Pocketbook 901. There was a couple pictures posted in MobileRead’s Deutsches Forum. But I do believe these are the first shots in the wild. 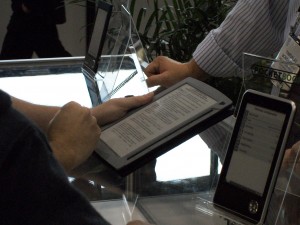 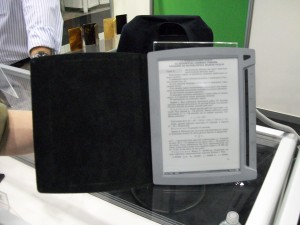 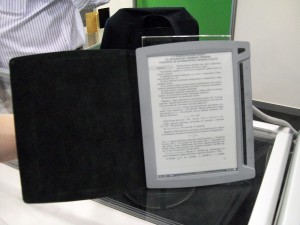 I think they should hire a good designer

That’s a ebook-reader I need.
Plastic screen, big, e-ink the design is good enough, not much functions but much file formats and a good price – I don’t need anything more, will 100% buy one, hope that is available in retail online shops too and not only for government.

[…] been doing recently. And E-ink has also been toying with the idea; one of their screens showed up at CES 2010 on one of Pocketbook’s reference designs.Bridgestone has also been working on a flexible […]