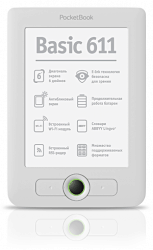 I’ve just come across a new Pocketbook ebook reader which has not yet been announced for the US market.

The Pocketbook 611 Basic turned up on The-eBook.org, and it looks to be Pocketbook’s new budget model. It’s based on the standard 6″ E-ink screen, but it’s using the older Vizplex screen, not Pearl.  Like t other Pocketbook ereaders, the 611 basic is running on an 800MHz Freescale CPU and it has Wifi, a microSD card slot,  and 2GB Flash storage. There’s no touchscreen, and it doesn’t appear to have speakers or a headphone jack.

Software details are still limited, but the 611 will have an on device ebookstore, RSS reader,  and a web browser. It will also have the same broad format support of PocketBook’s other ebook readers, including support for Adobe DE DRM, PDF, Epub, FB2, TXT, DJVU, RTF, HTML, CHM, DOC, DOCX, TCR, and FB2.

I really don’t have much info on this ereader; it hasn’t been formally announced anywhere that I can find and the product page doesn’t work well with Google translate. It’s projected to launch in Russia this month, but I’ve also heard that it won’t be available until next year. Retail is estimated to be around $14o.

I’m not sure what took them so long, but it’s good to finally see Pocketbook offer a 6″ ebook reader in the same price range as Nook, Kindle, and Sony. I think they were missing out on the market, given that the 602 is priced at $219 here in the US.

A Year of Library/Consumer eBook Price Comparisons: Has Anything Changed?

According to the forum at the-ebook.org the software is supposed to be identical to the PocketBook 360 +

PocketBook 360 + is an improved version of PB360.
PB360+ made a splash a little while ago as the e-ink device that can run Doom.

I was wondering if that was the case. It has just the 2 page turn buttons and the d-pad. given that both are running on Freescale CPUs it doesn’t surprise me that they’re using similar software. A lot of freescale’s hardware design is automated now, so replacing the screen and moving a couple buttons would be easy to do.

[…] with the usual bug fixes, tweaks, and other improvements, calibre also added support for the PocketBook 611 and the Onyx Boox i62. What’s rather curious about this new support is that neither device […]