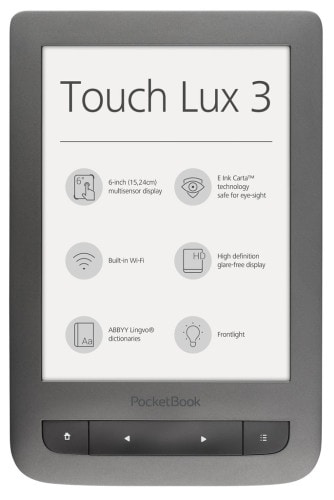 Pocketbook’s new 6″ ebook reader quietly launched in Europe this week, and it is every bit as unimpressive as last week’s leak lead us to expect.

The Touch Lux 3 is basically a slightly updated version of the Touch Lux 2. it replaces the Pearl E-ink screen with the next generation Carta screen (but not the high-res screen found on the Voyage and Kobo Glo HD), but aside from that the Touch Lux 2 is virtually identical to its predecessor.

Both the old and new models run Pocketbook’s software in a 1GHz CPU with 256MB RAM and 4GB internal storage. They feature similar broad format support, and Pocketbook’s apps, and they each have a frontlight, touchscreen, and Wifi.

For all intents and purposes, Pocketbook simply replaced one screen with another. If you’re looking for a novel ereader design, you’re going to have to look elsewhere.

Weighing in at 208 grams, the Touch Lux 3 measures 114.6 mm by 174.4 by 8.3 mm. While there’s been no official announcement from Pocketbook, this ereader is listed on Osiander.de for 99 euros, with immediate shipping.

All in all, this device is about as interesting as a wet balloon. I certainly don’t see anything to make it worth getting. Instead, I’d suggest that you wait for the Kobo Glo HD. It’s going to ship in another few weeks.

I’ve had a Kobo Glo HD review unit for about a week now, and I really like it. It’s an awfully boring looking ereader but the combination of the screen on the Kindle Voyage and a $129 price tag makes for an appealing device.

Are you sure that the screen of this ereader is not the same then Voyage and Glo HD?
Because on Pocketbook site the describe this item:
Comfortable e-reading on E Ink Carta™ HD screen
and the other two ereaders use the same screen, or i’m wrong?

The listing on Osiander does not mention a 300ppi screen but instead lists the resolution as 1024 x 758.

And PB site display description doesn’t mention anything about PPI:
According to the optical properties E Ink Carta™ HD screens are even closer to ordinary paper, due to a lighter background and more contrasting black color. The new technology enhances contrast by 50% to a value of 15:1 and reflective abilities by 20% compared to its predecessors. These figures make it possible to display text and graphics even more clear. Reading a smallest font text as well as watching the most sophisticated charts and graphs is now even more comfortable. PocketBook Touch Lux 3 e-reader is also equipped with LED frontlight that provides the feeling of maximum reading comfort in any light conditions.

But for 99€ should be a nice device for value, noww i neeed to understand shipping costs to Italy 🙂

Maybe should be 212 dpi such as Energy Ereader Pro+
https://www.energysistem.com/en/products/ebook_reader/e-ink_series/42492-energy_ereader_pro_+

Or pocketbook Ultra:
PocketBook Ultra is equipped with a E Ink Carta™ screen of the new generation with HD resolution 1024×758 pixels and 212 dpi, which displays information even more contrast and sharper. LED frontlight provides joyful reading, even in low light conditions and the new user interface let to adjust brightness even easier.

Yes, there are a lot of devices with the lower-res Carta E-ink screen. That includes the second Kindle Paperwhite.

Well, 'll wait for a Tolino Shine 2HD review, because, despite some gaps, has the same screen that Kobo Glo HD and Kindle Voyage.
BTW today ii was impressed by another Kobo item, Aura H2O: it’s 6,8″ screen is amazing, biggest then classic 6″ screen.
Well… i’d like to buy my first ereader (i prefear books with paper, clue and so on…. and i’m over 50yo 😀 ), but now i’ve a lot of confusion on my mind.

Author is an idiot,those pocketbooks are the best at allowing you to read what you want,you can download any book from the internet,while on crappy kindles and others you can only BUY them,screens are brighter there,but it is way worse for your eyes,on paperbooks screens like real books,though all of this let me to conclusion that you are just another,dumb idiot american reviewer:)

And also you have wrong specs about poxketbook ultra,it’s ram 512

Sorry,did not want to be so mean