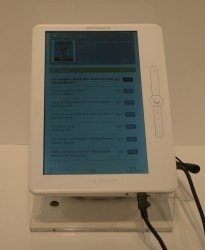 Late last week I brought you news of  Polaroid’s plan to release an ebook reader, and today I found out what it is. They’re going to have several models.

Someone leaked a photo last week which showed the new device in a poster. At the time of the leak no one knew what it was, but now I do. The PER 900 is going to be a 9″ basic ebook reader without Wifi, touchscreen, or much in the way of advanced features. It’s coming out around Father’s Day, but I do not know the price. You can see it at right.

Look carefiuly, and you might see a resemblance between the 900 and the 701 I just reviewed. It' more than just a resemblance; all the ports and slots are in the same place. Aside from the screen these two ereaders are the same device.

If you’ve read this blog long enough you might recognize the menu. It was developed by a particular ereader maker by the name of Gajah, and they use it on all their ereaders. But that’s not the interesting part.

I found this ereader in the Southern Telecom booth. Guess who is going to be Polaroid’s new partner?

From what I can tell, all the Slick ereaders (including the 701 I just reviewed) are going to be rebranded as Polaroid. In fact, the 701 on display in that booth already had the Polaroid brand on it. The hardware and software haven’t changed, but the brand has.

And that is the surprise. I suppose it shouldn’t be, because business deals like this are made all the time. But I didn’t expect ST to be the breakout ereader story this year. And they are. The Slick 701 is popular, and clearly ST plans to release even more models. They even picked up the rights to a major brand name.

BTW, ST also had a number of other tablets and ereaders in their booth, but I’m going to take a wait and see attitude. I don’t know for sure that they’ll be released, so I’ll hold off discussing the finer details. Here are a few pictures to give you an idea of what might be coming:

Here are some pictures, to give you an idea.

So nobody at CES was showing off any 10″ (or thereabouts) eInk readers?

There were no large screen E-ink devices, no. The iPad pretty much killed off that market.

There’s the Ectacto JetBook ith color E In and a 9.7 inch screen.

No it is a backlit color lcd. I just bought on for $35 dollars at big lot….

The bad
it take 4 standard AA batteries I have it running on nicad rechargable batteries but haven’t had it long enough to speak on battery life.

Wow, those are some of the crappiest designs I’ve ever seen. It’s like they’ve come from a universe where Jon Ive was never born.

Polaroid’s tablets are vaporware. And if those are what they are planning, my advice is that they should stay vaporware. Such fugly = immediate FAIL.

Was the Slick Er701 and Er700 there? Or is ST strictly all Polaroid ereaders now? I hope they don’t do away with the Slick ereaders.

Does the black ptab7200c look like a good ereader. I like the way it looks, but does it have a good software?

Last year Slick had a 5″ reader that looked very much like the Elonex EB500. I never saw that happen. I was hoping that this year someone would make it happen. Have you seen anything?

No, it looks like they bailed on that one.

[…] handheld and this might be it.This was one of the new gadgets that Southern Telecom had on display in their booth at CES 2012, and it looks like I am the first to post a review. I just barely touched on it back in January, so […]