Play introduced a new service today. This firm, which is the 4th largest telecom in Poland, is now offering a paid ebook subscription service to their customers.

The Czytelnia (or Reading Room?) service costs 29.90 Polish zloty (~$10 USD) each month and offers access to a catalog of 3,000 titles.  Readers have a choice of apps for Windows Phone, iPad/iPhone, Android, and Windows 8 and can register up to 4 devices. The apps support offline reading, and a reader can also transfer the ebooks to an ereader if they prefer.

I can’t find clear details on the number of titles available (public domain vs commercial ebooks), but I do know that Play’s partner boasts that they have 2,500 titles in Epub, Mobi, and PDF. 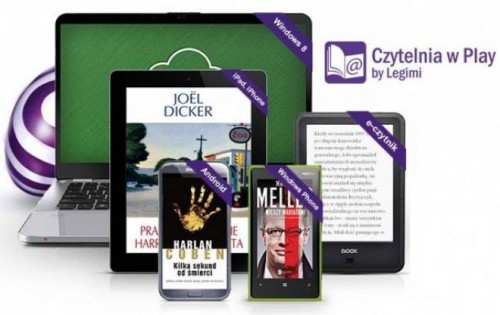 The Czytelnia service was developed in partnership with the Polish ebook startup Legimi, which offers its own similar service for 19.90 zloty per month. This name might be familiar to you; it briefly popped up in the English language tech news in late 2011 and then again in December 2012. It was tipped as being one of the hot prospects for the title of "Spotify for ebooks". Obviously that hasn’t happened, which is itself a rather interesting story.

If I had to guess, I would bet that Legimi has yet to succeed because they were laboring under the same handicap as 24Symbols, Bookmate, and other non-US ebook startups. None of those startups are based in the US, the one country with the biggest ebook market and the 5 largest sources of ebooks.

Tell me, what are the 3 most successful ebook subscription services today? I would say  Oyster, eReatah, and Scribd (assuming we exclude Kindle Owner’s Lending Library).

It might sound odd, but at this point I am beginning to think those 3 startups all owed their success to where they launched (to some small degree).  I can’t help but wonder if the lack of language and cross-border legal complications helped smooth the way, and I also think that being located in the US lowered their travel costs when they went to negotiate with HarperCollins, Simon & Schuster, and other US publishers. These kind of deals can take a year or more, with numerous meetings.  A flight across the US costs about a tenth as much as one across the Atlantic, and that adds up.

Then again i could be wrong. But if this trend is real then it could mean that the US will continue to be the center of innovative ebook enterprises for the near future. Thoughts?

Seeking Alpha is Wrong About the Potential Qalcomm/Nook Media Partnership

Absolutely right that the English language is the key to success on any significant scale at this stage, Nate.

The problem for any local store in any non-English language country is the tiny proportion of ebooks to print available in the local language.

It’s going to be a leapfrog of supply and demand in these countries as local publishers get to grips with local ebook markets. As the big publishers learned the hard way in the US, it isn’t quite as simple as scanning a print book or slapping a print-prepared manuscript into e-format.

Even with English language titles this produced many far from acceptable ebooks, and with the numerous variants alphabets of foreign countries the conversion to eformat presents that many more problems.

But we can expect the volume of local language ebooks to accelerate as publishers take the plunge, and as more local content is available so more local readers will convert to digital reading.

In the countries where companies like Amazon have got in early and established a lead (in large part because English is the main second language of most countries), it is unlikely they are going to lose that advantage, although the market share will gradually level as more and more players come into the game.

Google Play understands that and is making inroads into as many countries as it can, and the latest move by Nook, even if limited in device range at this time, will stand Nook in good stead.