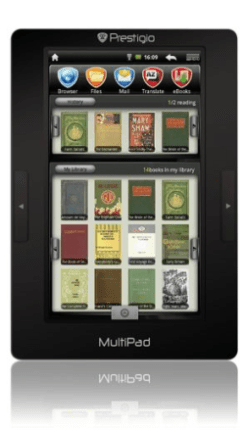 Prestigio have just announced another Android tablet, and based on the product listings this appears to be their 7th.

The MultiPad PMP3074B is a 7″ tablet that should be immediately recognizable; it’s also being sold as the Nextbook Next3.

Like all Prestigio tablets this one is originally a Rockchip design. I’d say that there’s a good chance that it’s running pretty much the same firmware as the Next3. It likely has the same video, music, and ebook apps with broad audio and video support.

P.S. If you look through the other product listings you’ll see a bunch of tablets that look like Archos made them. Yes, those are Archos tablet, but the original design for all those tablets came from Rockship, the CPU maker.

Hands-on With the Kobo Arc (video)