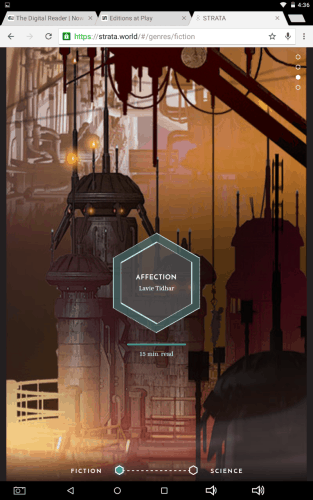 When print book designers Visual Editions announced their new collaboration with Google last year, they said that Editions at Play would "reimagine what the ebook can be from the ground up".

I’m still waiting for that to happen.

The third title under the Editions at Play imprint/brand is due to be released on Monday, and it is no more innovative than the first two. Published in partnership with Penguin Random House UK, Strata (not to be confused with the Terry Pratchett novel, also from PRH) is a collection of four related short stories and four non-fiction essays. The four stories are set in the same dystopian future, and the essays cover related topics such law enforcement, food production, diseases, and neurobiology.

Strata went live on Friday, and can be bought through Google Play Books. However, it cannot be read there.

Like the first two titles (released in February), Strata is not an ebook but a website. It exists at its own URL (strata.world), and cannot be downloaded or accessed offline.

That would arguably disqualify Strata from being called an ebook, but that is another topic for another day.

I got Strata on Friday, and when it comes to "innovative" features all I have found so far is background noise which plays when you begin to read a story or essay, and a new table of contents.

The background soundtrack was developed by audio house I Speak Machine, and I would frankly rather listen to nails on a chalkboard (fortunately, it can be disabled). But the ToC was cool. 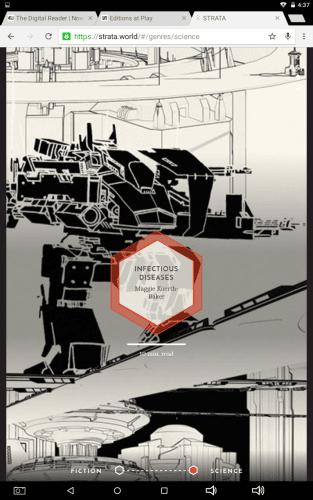 Strata has a nifty-looking ToC where the background image scrolls by faster than the foreground. This feature is known as parallax. It is a term more commonly used in apps and mobile software than in ebooks, and it is often used on websites because it looks nifty. (Also, the Fire Phone made a big deal about its parallax features, as you may recall.)

Its use is not, however, innovative, and it doesn’t really add anything in this case. While parallax looks cool on retail sites, in Strata it gilds the lily and makes it harder for you to navigate to the next story.

In fact there is nothing to Strata that we haven’t seen before on websites; the only difference between this and other websites is that Strata is labeled an ebook.

And that’s not an innovation in tech or engineering; the use of confusing descriptive labels is more marketing than tech (and not even an original idea in that industry).

All in all there’s nothing more to see here than with Editions at Play’s first two titles.

But it is early days yet; Editions at Play plans to release more titles. They have one title scheduled to be released this spring (All This Rotting by Alan Trotter), and they are currently soliciting ideas for new websites.

With luck, one of the proposals will lead to an innovative project.

If you would like to try Strata yourself, you can buy it in Google Play Books. It should work on the latest versions of Android, and on iOS, but it won’t work everywhere.

Do let me know what you think; I’d like to know if I’m too jaded to appreciate new ideas when I encounter them.

"That would arguably disqualify Strata from being called an ebook, butthat…"
Ha ha. Freudian slip?

No, just a typo. Fixed it, thanks!