There was a spate of rumors circulating around this time last year that Amazon was planning to open a retail store in Seattle. None of those rumors ever panned out, but a recently discovered job posting on the UK classified site Gumtree suggests that there may possibly have been a grain of truth to the rumors.

Late last week a business consultant by the name of Dan Barker found a job listing on the UK classified site Gumtree. The listing invited readers to apply for a position in Amazon’s first retail store.  The job description has since been deleted from Gumtree, along with the account it was posted from, but according to the copy in Google Cache Amazon is opening their first retail store in a suburb of London:

We are opening a new branch in Westfield Stratford. We require a number of applicants that can meet our work ethics.

As this is our first Amazon store you will be a part of our companies history. You will be heavily promoting the store within Westfield enticing passers by to visit our state of the art show room. Potential for career advancements.

There’s not much else to the listing besides some vague job requirements and a salary/benefits offer, but if this listing is real then it seems Amazon is planning to use this location as a showroom more than anything.

Before you get all excited about this, let me temper the excitement with a little caution. I’m not completely sure that this listing is the real thing. I’ve looked over this listing quite carefully and I have found a number of issues that lead me to doubt its authenticity.

First, we don’t know who actually posted that job listing. It was not posted on Amazon’s official account on the site but on an account that has since been deleted. In fact, Amazon doesn’t appear to have an account on that site nor are any other Amazon jobs listed there, which by itself raises many questions about the authenticity of this listing.

Amazon posts all their jobs on their own website and on work related sites like LinkedIn, Monster.com, etc. This includes all their job openings all over the world, including the UK. They don’t use generic classified sites like Gumtree, not so far as I can tell.

Second, the listing looks almost nothing like what Amazon has posted elsewhere. It’s far too short when compared to any of these listings, and furthermore one of the 4 requirements is "Please provide your C.V." I don’t know about you but that strikes me as an attempt to puff up a fake listing and make it look legit.

If Amazon really were hiring for a retail store then it would mean they were ready for all of us to know about the store. There would be other job listings, both for store staff and managers as well as support staff. But since there are no listings I don’t believe that this listing is the real thing.

When the rumors were circulating last year I didn’t believe them. I couldn’t see what Amazon would gain from a brick-and-mortar store that would justify the expense. As I wrote a couple months ago: 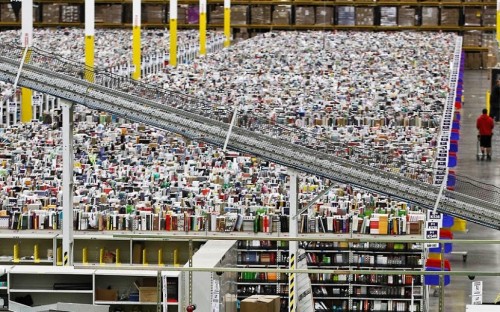 Furthermore, Amazon has always said that they only enter a market if they think they can do it better than the competition (from November 2012):

At this point no one has come up with something Amazon could do better than anyone else.

There’s always the chance that Amazon might open a retail store, and in fact it is an idea that Amazon has been rumored to be toying with since at least 2007. That’s when they filed for a patent for a building which looked like it could be a retail store concept design. I think the size and shape suggest that patent is more likely an early concept that led to the drop-off delivery lockers Amazon has now, but I could be wrong.

So far there hasn’t been a credible argument to explain Amazon opening retail stores nor has there been any credible rumors. Until one or the other happens I will continue to disbelieve the hype.

You Tell Me: Authors, Do You Plan to Have a Sale on Black Friday?

Sooner or later Amazon will very likely open a chain of stores…
…but when they do they are not going to look like anything anybody expects.
The closest that anybody has come to what they’ll do is, maybe, ikea.
(Or the old Best Products Catalog stores.)

After all, what do B&M most complain about Amazon, *after* their prices? Showrooming…

But that day is still a ways off.
(And yes; the posting was fake. Look at the bad grammar.)

Amazon opening a B&M chain is about as good of an idea as releasing a Kindle phone – a terrible one. There are huge costs associated with running a B&M business (rent, utilities, maintenance, property taxes, and the largest cost – payroll) that Amazon can’t support on their .5% margins.

Which means they will have to either raise prices or take massive losses for little effect. Amazon has terrible cashflow to begin with, so they simply can’t afford to do the later. And the former is the only competitive advantage Amazon products have to begin with, what purpose does an Amazon retail store even serve? How would they add value to the customers who can order it online already for less to make them want to come into a store (the problem every B&M retailer is dealing with)?

This is nothing but a fanboy’s wet dream.

And Ikea is a bad example to compare Amazon retail to – they still have a pretty hefty marginal markup on their products, and (more importantly) are privately held and thus not responsible to outside investors.

The sun came out this morning.

Also, it should be "company’s history" not "companies history". This doesn’t fill you with confidence about the literacy of the recruiter.

I missed that one. Good catch!

If the UK Gumtree is anything like the Australian one, the this is definately a fake…

I just stumbled upon this while researching something entirely unrelated.

As a recruiter, I can tell you that most people in my industry (and their counterparts in client companies, like amazon) are semi-illiterate, so the poor grammar is no clue.

Fake job adverts are common for many reasons, but Gumtree is notorious for recruitment (and other) scams probably aimed at harvesting enough info from applicants to support some sort of fraud. Amazon is just a brand with enough credibility to attract and convince a few poor, naive souls to serve up the data.

[…] are brand new; they certainly weren’t there when I was researching a related story in late April. The job is a part time position with duties including being a Kindle evangelist, leading training […]