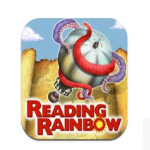 The kid’s reading app Reading Rainbow has been available for the iPad and iPhone for nearly a year now, and it looks like . Update: Amazon has had this app since February, and it was even mentioned at the launch of Kindle Freetime.

Amazon sent out a tweet last night with an attached photo that hints at the possibility: 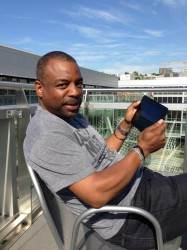 The link in the tweet leads to the photo at right, and yes that is LeVar Burton holding a Kindle Fire HD. I’m not sure what he is doing with it, though; with that much light on the screen it is unreadable.

This app isn’t currently available in Google Play, which means Amazon might be hinting that they have scored an exclusive. Given that the Amazon Appstore is freely available in much of the world and can be installed on virtually any Android device, there is little downside to RR taking Amazon’s money in exchange for the exclusive.

And if the exclusive bothers you, you will probably also be able to find this app on free app sites like the 1Mobile app store fairly soon after it is released.

Amazon has been making a big push to make the Kindle Fire family of tablets, including launching Kindle Freetime last Fall. That’s when they first revealed that they offered the Reading Rainbow app, among many other kid-friendly apps. They’ve also customized several sections of the Appstore so the apps are appropriate for small children.

It would not be unprecedented. The Super Why app was an Amazon exclusive for a little while.