Reeder for iOS and OSX to Break Free of Google Reader 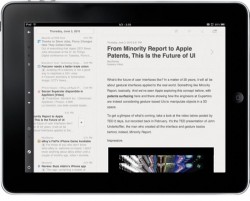 The developers behind the Reeder news reader app announced today that their app was not going to die with Google Reader in 3 months. Instead they plan to continue to work on the app and add new features.

One of the new features they plan to add support for other RSS services (besides Google Reader). Right now the iPad and OSX versions of Reeder require Google Reader, but the iPhone app does not.

The iPhone app also supports Fever and Readability integration, lots of sharing options, and other features that will be showing up in the iPad and OSX apps in the next few months.

BTW, the OSX and iPad apps will be available for free (until they get those updates).  If you’re looking for an iPad news reader app then this is probably worth checking out.

It’s times like this that I regret that Apple-only apps don’t get much attention on this blog. I keep hearing good things about Reeder but I have not used it myself. Have you tried it, and if so what did you think?

I use reeder on all 3 platforms as my go-to RSS reader and it’s fantastic — responsive, good design, and just enough utility to be practical.

I use Reeder mostly on my Mac and iPad. I am looking forward to the updates that are already on the iPhone. I have tried others but like the interface and keyboard shortcuts to get through so many feeds each day.

I use Reeder on my Mac and iPad, and occasionally on the iPhone. It has its quirks, but I enjoy it because the interface is clean, and I can zip through hundreds of feeds at high speed. Search is also good.

I’m thrilled that Reeder will be continuing. 🙂

[…] popular app for OSX and iOS gained its independence from Google Reader last April, and it’s back on my desk again today with the news of a major new release. Reeder 2, the new […]