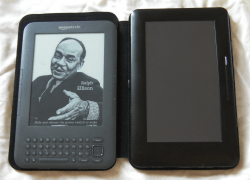 Aluratek are one of those surprise entries into the ereader market. They jumped in back in early 2009 with the budget ebook reader Libre Pro. They stayed in the market through the  price war last year, and last fall they started adding new ereaders to their stable. The Libre Touch hit the market in January,  and it is a fairly good ebook reader.

This is a review that’s been a long time in coming. I originally got this ereader back before BEA 2011 (in May), but I held off on posting the review because I was waiting on a firmware update. The device I received was a production sample, and I got it from the manufacturer, not Aluratek. It had a firmware from last fall which it was buggy, unstable, and had poor battery life. It turns out I shouldn’t have waited. I still have buggy hardware even though the software has improved.

I can’t vouch for the battery life, unfortunately. But I can say that the Libre Touch is somewhat heavier than a K3, but it’s well balanced and easy to hold. It’s about as wide as the K3 and less than an inch taller. The general proportions of the Libre Touch are nice, and the touchscreen works well. I haven’t had any issues with it not responding properly. The page turn buttons are nicely placed in the middle of the right edge, which means they won’t work if you prefer to hold the ebook reader in your left hand. The current firmware won’t let me turn the device upside down.

BTW, it also has this annoying buzz when you do anything on the screen. I know it’s intended as feedback, but it’s rather annoying.

It’s currently running Android v1.5, and I’m told that it will get an update to Android v2.1 or v2.2. But since it can’t really function as a tablet, I’m only going to consider it as an ebook reader. It ships with the basics: web browser, email, video/music players, file manager, and an alarm clock. They all work reasonably well, but they’re just the standard apps you’d find on most generic Android devices.

The Libre Touch uses a custom Home Screen, and it takes getting used to. There’s a calendar widget and RSS widget across the top and 3 vertical sections below: history, library, and widgets. The last is basically an alternative for the pull-up menu, and it has options for Wifi, the media players, Kobo ebookstore, and settings. The History and My Library sections are self-explanatory, and they also have sub-menus you can open. So instead of seeing a handful of books, you will be able to see a dozen or so on screen at once and scroll through them all.

The Libre Touch has broad audio and video support, and it actually supports more formats than I can test. The video and audio players are decent, but not spectacular. You’ll find they have all the basic features, and the Libre Touch is quite adequate at at downgrading high resolution video. But the sound volume is a problem. It has just the one (quiet) speaker on the back. You might want to keep a set of headphones handy.

It has the same basic reading app as on the Nextbook ereaders, so I’m going to call this the RK-2 reading app. It’s the second variation of a reading app that I’ve seen on Rockchip Android tablets (the CPU maker and hardware designer). The app supports Adobe DE DRM, and it reads Epub and PDF.

It’s workable, and it has a nice minimum set of features ( 5 font sizes, TOC support, bookmarks). But it also a faux page curl, and I hate that. The page curl also slows down the turning the page, which is a problem. The Libre Touch isn’t that much faster than the K3.

PDF support is okay, but the reading app only supports 5 zoom levels and does not reflow the PDF. A standard 8.5×11 PDF is readable on the 1.25 zoom setting. You can also zoom in closer and then swipe your way around the screen. The zoom will persist after you turn the page.

I like the general feel of the Libre Touch, but it’s a fairly basic device and it’s a little on the pricy side ($149 retail) for what it can do. Looking at it strictly as an ebook reader, I think you’d get a better value from the new Kobo Touch, Nook Touch, or the Kindle 3. Any of those 3 gadgets will offer you better battery life and comparable (if not better) reading options. There are also any number of Android tablets in this price range that would be a better buy.

That being said, if you were given this as a gift then it should still serve you well as an ebook reader. It is quite adequate.

It has something in side that vibrates whenever you touch the screen. I’m not sure what else to call it.

[…] hardware. The Gobii Wifi looks awfully similar to the Aluratek Libre Touch, an ebook reader that I reviewed a few months back. The Libre Touch had decent hardware, but it was hampered by the outdated firmware. It was running […]