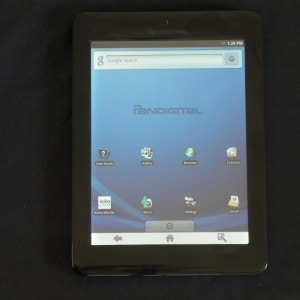 A few weeks ago I wrote a post about how to change the firmware on the black Novel. Since I now had a new firmware to try, I decided to write a second review of the black Novel. The review was delayed, because I spent a few weeks trying to find a way to overcome this tablet’s shortcomings.

Update: Much of this post is outdated. Rather than read this review, why don’t you go install the latest firmware update for this tablet (here)?

So what do I think of it? To put it simply, there are better options out there.

The video is at the end of the post.

First let me give you some background. The black Novel is based on a 7″ LCD  screen with a capacitive resistive touchscreen, Wifi, accelerometer, 2 GB Flash, SD card slot, and a stylus. And in case you were wondering, the black Novel is an entirely different set of hardware from the 7″ white Novel.  They do not run the same firmware.

There are a couple official firmwares for this tablet (also several hacked firmwares). There’s the US firmware, which is tied into the B&N ebookstore, and there’s a CA firmware, which uses the Kobo ebookstore. The US firmware is a locked down ereader design with a custom home screen. You’re blocked from adding any new apps or doing anything other than the limited activities that it ships with (read, browse the web, music, video etc). On the other hand, the CA firmware is an open Android tablet with a normal home screen, apps menu, etc.

Both the US and CA firmwares run on Android v1.5, and that’s a problem. It’s very difficult to find apps that will run on v1.5. None of my ebookstore apps (like the Kindle app

It does have a video player (same as on the US firmware), but it’s not very good. I don’t know if it’s a hardware, software, or drivers  issue, but the Novel can’t even play the sample video at 640×480 at 30fps. It’s no good as a video player.

Someone seriously screwed up the ebookstore. It’s tied to the Kobo ebookstore (their mobile website), which is fine by me because I have a library of a few dozen free ebooks with Kobo. Unfortunately,  I can’t access the free ebooks from the Novel. This is a pass fail for me, and I’m dumbfounded that no one caught this.

And yes, I think I know the problem (hi folks from Kobo/Pandigital). The free ebooks I got from Kobo can be found under the "I’m reading" tab. I cannot see that tab in the Novel’s ebookstore, so I can’t download the ebooks.

The reading app itself is slightly different from the other firmware. Instead of swiped page turns, it has a couple small zones marked on the screen where you can tap and turn the page. I wish the zones were bigger, but I’m glad they’re there at all.

The Epub and PDF experience is much the same as on the other firmware.  As always, I wish there were more annotation options, but the options available are adequate.

The Novel with the CA firmware is an underpowered tablet with little app support and a poorly conceived UI design. It’s not a terrible tablet, but there are better options out there. Heck, Pandigital offer 2 better tablets.

Cant view the video. Its set to private

There’s gotta be something wrong with Youtube. I didn’t set it to private.

Are you sure it’s a capacitive screen? Wouldn’t be much good with Android 1.5! And from my impression of Pandigital, it seems unlikely that they would put a high-end feature on one of their products…

You’re right. I don’t know why I thought this was capacitive, but I just looked at the difference between the 2 and this is a resistive screen.

Wishful thinking. I didnt think it was either and when I saw you giving it the pokes in the video I could tell it wasnt for sure.

How did you get the canadian firmware?? or even install it? it keeps hanging on the serial number portion of the pc install !! please help!! i cant even get teh us firmware!!

I got it back when it was still available as a separate download. I don’t have a copy anymore, sorry.

You’re absolutely right about the Kobo design. I want to read a book – why do I have to go to the library first? Same with when I’m done reading – I just want to close the app, but no, I have to 'go back to bookstore' first. Silly! And how did you get the next/prev page zones to appear? I don’t have those two grey boxes – it’s simply guesswork! So after a few minutes, I gave up and downloaded CoolReader and FBReaderj and either of them gives such a better reading experience.

Maybe you have a later firmware than me, and they took away the little squares.

Nate, I have a copy of the Polaris_update.dat from Dec 2010 and the 3.0.0.0 . exe version update . Both are for the Black Pandigital 7″ unit. I can send to you if you have an email address. I see that the new up grade software from Jan 2011, gets stuck at the serial number – gives an internal error and shuts down….so much for that upgrade to the 5.0 verson.

I have a copy of the latest firmware, and I’d upload it.

But I really think people should use the update tool to find out which firmware they need, and then download it from here:
http://mirror.support.pandigital.net:8080/Support/FW/Novel/

I checked out that listing in the mirror site and I could not figure out which file was for the Canadian black 7″ PD unit? how does one correlate those file names with the proper device, to ensure the proper down load of the most recent FW update?

That is a problem, yes.

The black Novel uses the DAT files for the update, not ZIP. I grabbed the one with the latest date and it worked for me. But I don’t recommend anyone else try it; it might possibly not be compatible with your Novel.

I would be happy to try out the updates on my CA black unit.

You can get them from Pandigital.net

I tried updating my Panditigal Novel 9 (Black) with the 7 inch update. Its totally hosed now. I did not backup anything. Is there a way to get back to the original firmware or get a copy of the ones listed here as upgrades. None of the links seem to work.

Here’s the firmware update for the 9″ Novel.
https://the-digital-reader.com/2011/12/30/new-firmware-update-for-the-9-pandigital-novel-adds-android-market/

Thanks! I loaded the firmware as instructed and the button came back to life however, the screen resolution is still way lower then when it ran on the factory firmware. The startup screen is Green (was Blue) and the content overall has a greenish yellow hue.
Also, the icons appear bigger. Am I missing something?

Any Help is much appreciated!

The firmware you installed is based on the factory firmware. The only changes were some extra apps were included.

PD_Novel folder is totally empty could that be part of the problem?

[…] which in late 2010 loaded the Kobo Android app on one of the first 7″ budget tablets (the black Novel, to be exact). There were also several Kindle clones with 7″ LCD screens. Those devices featured keyboards […]