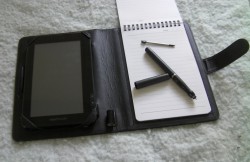 I’ve been playing with this neat little pen/tablet combination for the past several weeks, and I have to say that it’s a fun little device.

It was originally designed and built by the Chinese manufacturer Yifang as the M7. Charbax spent some time playing with it at CeBIT back in March. He shot a good demo video in case you’re interested. It  was also supposed to be sold by Augen as the Espresso Firma; at least, that’s what they announced last fall. But I don’t know what has happened to it.

I got this tablet from E-Fun, a US based importer, as the Nextbook Next5. It’s a decent but ordinary 7″ Android tablet running on a Rockchip CPU. It has a resistive touchscreen (800×480), 2GB Flash storage, a microSD card slot, mike, speakers, Wifi, and it’s running Android v2.1.

It has a case and notepad, both of which you’ll need if you want to use the pen. And it has a tiny stylus, but I recommend leaving it in the box. The screen worked better with my fingertip than with the stylus.

It ships with a number of apps, including Youtube, Borders ebookstore, a file manager, email, weather, and a sound recorder. It also comes with a second home screen – one that vaguely resembles the one on the Next2 or the old Pandigital Novel firmware. The reading app is also the same as on the Next2, which is something of a problem. It reads Epub and PDF, but it only works with page swipes. But you can install apps so it’s not a serious problem.

Unfortunately, I repeatedly had trouble with the Kindle app not letting me download apps and the web browser behaving funky, so don’t pin your hopes on adding new apps. Also, the included Youtube app can’t find certain videos. On the other hand, the latest version of the Kindle app is often picky. And I did successfully install other apps.

On the plus side, this tablet does have pretty good video ability. It has a high quality screen (not as good as the iPad but better than most) as well as a decent graphics ability.  The 2 samples I tried worked both at normal and full screen without dropped frames.

The reading app supports Adobe DE DRM, and it reads Epub and PDF. It’s workable, and it has a nice minimum set of features ( 5 font sizes, TOC support, bookmarks). But it also a faux page curl, and I hate that. The page curl also slows down the turning the page, which is a problem. PDF support is okay, but the default reading app only supports 5 zoom levels and does not reflow the PDF. A standard 8.5×11 PDF is readable on the 1.25 zoom setting. You can also zoom in closer and then swipe your way around the screen. The zoom will persist after you turn the page. 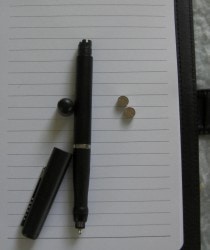 This is really the most important feature, and it’s the reason why this tablet costs about $50 more than its competitors. I have to say that it works very well. It’s more than the slapped together system that I was expecting from a Chinese manufacturer; some serious engineering talent went into this device.

I found the pen easy to use. It took a couple minutes to learn how it worked, and for the most part it was trial-and-success, not trial-and-error.

It’s not a write-anywhere system. The pen has to be positioned so the sensors on the side of the tablet can see it. This means you’ll need to use the tablet, pen, and case as a singly unit. That shouldn’t be a problem most of the time. BTW, the notepad will slide in from both the top and bottom of the cover. The cover is reversible and thus usable by lefties.

So far as I can tell, the pen only works with the one included sketchpad app.  The app has quite a few features, so again it’s not much of a problem. Unlike most drawing apps you’re not limited to a handful of colors and line thicknesses. Instead you have a spectrum of colors and thicknesses and slider bars to choose with. The same goes for the eraser, too.

If you look at the lead picture, you’ll probably notice that the pad of paper is larger than the screen and is about the same size as the tablet. That’s okay; the app knows how big the pad of paper is and as you approach an edge the image will scroll with you.

The pen is powered by a couple button batteries. It won’t work without them, and it won’t draw on the screen if you’re not pressing down on the tip. But if you want to save paper you can leave the notepad closed and faux-draw on the cover.

You can save and email content, and there’s also undo/redo options.

Is Byliner About to Close?

New Rumor: Amazon is Working on a Smartphone