Ricoh epaper promises over double the brightness of its competitors 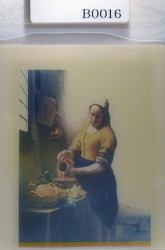 Ricoh have just unveiled a new epaper screen that they promise will have 2.5 times the brightness and 4 times the color spread. They’ve been working on this screen tech since before they released their first demo in march 2009 and they’re finally ready to show it off.

Like E-ink, this is a reflective, bi-stable screen. On display at SID 2011 this week, the new display uses a lamination electrochromic method of production which forms separate cyan, magenta and yellow organic layers between two substrates. There’s no word on cost or release date.