Samsung posted this concept video a couple days ago. As you can see, it shows a flexible, collapsible, and transparent tablet that is certainly not possible now and probably not possible any time in the next years. 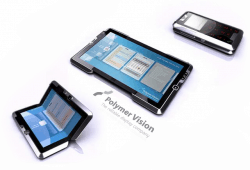 I’ve shown you flexible screens before, but this one is a far beyond them. The Readius tablet concept is collapsible, but it was never intended to be nearly as innovative as the concept above. And it’s based on an E-ink screen, which will never be transparent.

And then there’s the Flexphone, a smartphone/tablet hybrid concept video that can expand from a 4″ screen to a 7″ screen. This was also just a concept, but I think it has a  better shot of hitting the market.

While I like the idea  of an all in one, I question whether it will happen at all. By the time the screen tech is ready to actually make the Samsung concept above, we’ll have phones so thin, powerful, and cheap that it won’t matter to you to carry it along with the thin, cheap, and powerful tablet.

Oh, and one other detail I noticed is that the concept video above shows just a single use at a time.  It doesn’t look like they thought about someone wanting to email while talking on the phone. I do all the time, so I’d need a second screen.