The best part about going to a tech conference (especially one with a track dedicated to screen tech) is that I get to hear the most interesting rumors. For example, I was told yesterday that a rumor has been circulating for the past few months that Samsung has been looking to divest themselves of their Netherlands-based screen tech company Liquavista.

I can’t name my source, unfortunately, so for all you know I could be making this up. But the person I spoke to is the head of a competing screen tech company, and he had been hearing rumors since long before I reported on the story a couple weeks ago.

The really interesting part (to me, at least) is that my source hadn’t heard about Amazon being interested. All he had heard was that Samsung wanted to divest. My source told me that no one in the industry can understand why Samsung would want to get rid of Liquavista, but that is what is going around.

Suddenly the rumor about Amazon being interested in investing in Liquavista isn’t quite as crazy as it sounds, is it? It would certainly be a logical use for the new financial holding company that Amazon created in the Netherlands in early January.

This might also explain why the CEO of Liquavista, Johan Feenstra, is now connected on LinkedIn to a Dutch lawyer who, according to his LinkedIn profile, specializes in M&A employment issues.

All of this is completely speculative, but as I have said before I think Amazon could be looking at Liquavista for screens for the next Kindle hardware. Given that it now looks like Samsung doesn’t want the company I really have to wonder if Liquavista is changing hands.

If anyone has other info in this story, or can tell me where to look for it, please leave a comment or send me an email.

P.S.  Here’s some background on the current state of Liquavista’s screen tech. As you can see it’s better than E-ink in some ways but nowhere near as good the LCD screens Liquavista is making.

Amazon is Killing it in the Subscription eBook Market

Is Google Pressuring Asus to Abandon Dual-Boot Tablets? Probably Not 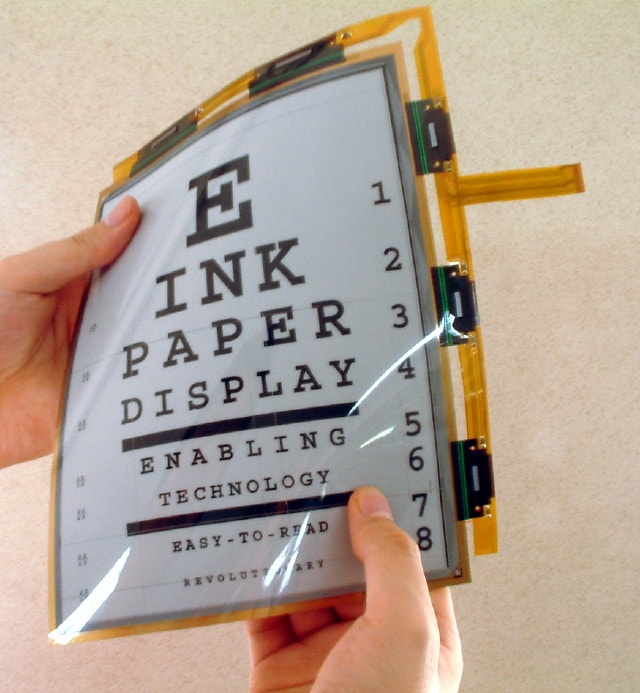 Thanks to Apple, E-ink Reports Profits Up Last Quarter

It does sound crazy that Samsung wants to get rid of Liquavista, unless they have something that’s even better or there’s something wrong with the tech that we don’t know about.

Also, let’s pray these are just rumours. If Amazon gets their hand on liquavista, how willing will they be to license their tech to other companies?

What makes you think anyone would be interested? Liquavista will probably never be an equal replacement for LCD screens, and given that the problem of battery life has largely been solved for mobile devices there’s not much reason to compromise the screen quality.

Largely? Yes. Comparable battery life is within reach…
…but not quite here yet.

At the product level we’re seeing close to full-day non-stop battery life (12+ hours) but the way they’re getting there is mostly through very large batteries.
(The iPad3 runs off an almost 12,000 mAh battery. Versus a 1500 mAh capacity for a Kindle DX. Stick that iPad battery into an eink device and the thing could run 240+ hours.)

There is still room for reflective displays; extreme low-power displays can translate into thinner, lighter, cheaper devices just by letting a vendor dial in a smaller and cheaper battery, casing, and charger. (Do note that most modern high-res tablets have charging issues. That battery capacity isn’t without issues.)

The window of opportunity is closing, though.
If Liquavista is to amount to anything they need to start shipping product this year. And if they can’t Samsung isn’t going to find a taker even if they give it away.

I disagree. From what I have seen battery life is merely a matter of good hardware design:
https://the-digital-reader.com/2012/02/25/lcds-cannot-be-read-outside-and-other-nonsense/

A year old Galaxy tab lasted 2 days. That is what I call a solved problem.

I’ve never needed to use a gadget for 48 hours straight so that time period is irrelevant. I judge devices based on what they can do under realistic conditions.

If I had used the Galaxy Tab heavily over the course of a day it would still have outlasted my needs. Even budget devices can last nearly a full day’s use, so I would say that battery life is a solved problem.

Battery life on a tablet is very difficult to judge. Using my tablet as an ereader, I get around 16 hours battery life, 10 hours if playing video, but only 4-5 hours running fairly undemanding games. Just changing the ereader setting from day to night changed battery life from 12 to 16 hours.

Also, a lot of cheap Android tablets were shipped with the phone functions active, even when the tablet had no 3G hardware. Removing the phone APK files could sometimes double battery life.

Samsung has to have seen how Pixel Qi has gotten no traction and how Mirasol’s screen flopped in South Korea. You need just two data points to draw a line.

Well, liquavista screens are supposed to be much better, right?

They’re also not on the market yet and when they are they won’t have the support of Pixel Qi’s largest customer, OLPC.

The problem is that the performance of the tech by itself is not enough.
The tech has to work as advertised, be scalable to a variety of screen sizes and resolutions, and do so at production volumes and prices comparable to LCD.
Samsung may have discovered that the tech works exactly as advertised but only at a specific screen size or resolution or that the yield of the manufacturing process is inherently low or, worse, the screens decay naturally much faster than acceptable. (That last one was a big problem with early OLED efforts.)

There may also be a culture class between the Liquavitsa staff and the Samsung management. Samsung may be facing a Bungie scenario: sell the unit or face a total staff walkout.

It is uncommon but not unheard of.

The first question that needs asking is how much Samsung would want for this asset. Amazon would almost certainly have to pay cash for the whole transaction, so the first sign would be Amazon taking on more debt since the do not actually have any cash to speak of.

The second question is how badly do they want it gone.

In that case the question becomes why, and the most likely answer to that is that Liquavista is a tech turkey.

Since Samsung does not really need the money I guess they could sell it for a penny, but they don’t strike me as the type. Anyway Amazon is likely to become a direct competitor for Samsung – one could argue it is already – so Bezos must not expect any favors.

If Liquavista is a tech turkey, Samsung would just fold it–the way Canon folded their SED operation–and eat the loss. Or trim it down to near nothing and offer to license the tech in case somebody else can make something of it. And since no rational player would buy it without due dilligence, if it is a turkey nobody would want it.

That is one of things that makes this "mystery" interesting.
Trying to sell it so soon after buying it *without* trying to get a product out the door?
Invites speculation.

And the fact Amazon will one day be a competitor to Samsung is a good reason form Samsung to sell Liquavista to Amazon. It’s a tech that will only be useful in certain marginally profitable niches. Also, developing the screen tech will be sufficiently capital intensive as to act as a curb on Amazon’s expansion.

A poison pill scenario? 🙂
That argues that Samsung would be pulling a fast one on Bezos.
I dunno ’bout that.

I doubt Amazon would buy Liquavista unless they were ready to go into production at the rate of hundreds of thousands of screens a month sometime before fall. And there would still be the problem of where the screens would be built.

I’m still curious why Samsung would want to sell and still skeptical that Amazon would be willing to buy. But we’ll know soon enough.