EDIT: This post combines several posts about Sharp and its ereader effort.

Sharp just held a press conference and announced their intent to sell ereaders and open an ebookstore. You can see their 2 models at left; specs for the 5.5″ and 10″ device were not released. They also mentioned that they were in discussions with Verizon to enter the US market (as well as Japan).

Curiously enough, Sharp are planning to use a custom ereader format. It sounds like they picked this over Epub because it has better video and audio support.

The Inquirer is reporting:

With 5.5-inch and 10.8-inch versions the reader can also play audio and video as well as show words and pictures. The multimedia reader is referred to as an Next Generation XMDF device because it is an advance on the 2001 original XMDF that was sold for Japanese novels and manga comics. Later this year Sharp will launch a digital platform to promote e-book distribution.

Next Generation XMDF is described by Sharp as a "core technology". As well as video, audio pictures and words the next-generation XMDF allows publishers to set the layout of a downloaded magazine automatically. The reader was unveiled in July at a Japanese press conference.

I’m looking forward to the new format, actually. It fills a need that Epub and Kindle formats can’t.

Sharp to End Production of the Galapagos eReaders 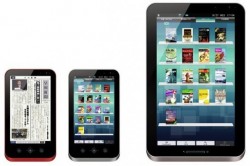 Sharp just announced that they were killing the 5.5″ and 10.8″ Galapagos ebook readers. Sharp launched these gadgets last fall in Japan and had also planned to launch them in the US, although there is no sign that any were ever sold,

Sharp will stop accepting orders for the tablets at the end of the month. There’s no mention of why they’re being killed, but they are last year’s model.

The ebookstore that Sharp launched to support the ereaders will stay open and it looks like Sharp plan to follow through on the 7″ Galapagos A01SH model they announced last month, though no release date has been set. It will have a high resolutions screen (1024×600), a pair of cameras (5MP and 2MP), Wifi, and it will be running Android v3.2 Honeycomb a Nvidia Tegra 2 dual core CPU. Battery life will be in the region of 7 to 8 hours.

Self-Published eBooks are Coming Soon to a Library Near You

Sharp. The Zaurus. That’s all anyone needs to know. Don’t waste more time on this one.

[…] name of their partner as the codename? No, it’s much more likely that Entourage refers to the Sharp e-readers we saw yesterday. […]