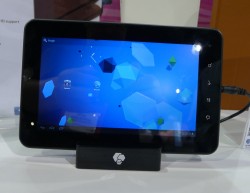 Skytex is a relatively established name in the tablet niche (that means that they’ve been selling tablets for over a year). And today they showed me 2 of their new Android tablets.

Skytex also has some Windows 7 tablets in the works, including a Cedar Trail tablet running on a dual core CPU. But it’s Android that I’m particularly interested in.

A few weeks back Skytex started shipping the Skypad Alpha 2, a mid level 7″ Android tablet running Android v2.3. Today they showed me the Argos, a 7″ tablet which is going to be a major step up.

It’s due out in April with a retail of $199 – the same as the Kindle Fire. And it’s also not a lot more expensive than the Alpha 2, so keep that in mind if you’re looking at one. 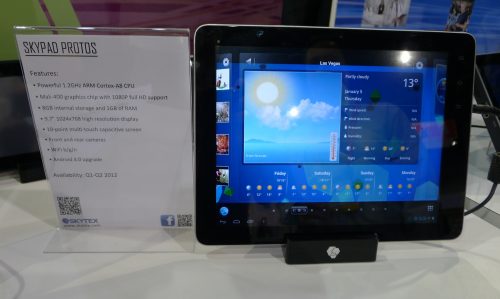 The Protos is going to be quite similar to the Nextbook Elite 10, and in fact they have virtually identical specs. The main difference will be that the Elite 10 is considerably thinner and lighter. That’s probably a sign that E-Fun has the better hardware team.

I came across a rather interesting detail today about the 1.2GHz CPU mentioned above.  You’re going to here that spec a lot in the near future, so I thought you might want to know why.

The 1.2GHz CPU with a 400MHz Mali chip is the hot new CPU right now. This chip was designed by Boxchip, a Chinese chip maker. Everyone likes it right now because it’s relatively cheap, powerful, and reliable. It’s so popular that Boxchip has even supplanted RockChip as the cheap chip maker, according to one tablet maker I spoke to today.

These 2 tablets are actually the 5th and 6th tablets I’ve seen recently with those CPU specs, it’s that common. and I bet we’ll see more in the future.

That Protos looks like one that will be under the Cruz name too. Strange how many 4:3 budget Andy tabs are coming. Especially since someone prominent complained in a post this week that Andy couldn’t be adapted to 4:3 because it was made for 16:9 screens.

At any rate, it will be interesting to see if these can do my PDF torture test. I’d like to have one of these if it can.

Agree with Mike Cane. The single cores are all underpowered. A $249 dual core sets a new standard that all manufacturers should aim to hit.