Some thoughts on the ebook sales figures

For the longest time now, I’ve taken a position on ebook sales that is different from virtually every one else who has cared to comment on it. I insist on considering the data month by month, and most people aggregate the monthly figures into quarterly or yearly.

TBH, one is supposed to look at the data both ways because they tell you different things. But until someone else starts considering the monthly change, I’ll just focus on the one way and leave the other to everyone else.

Here’s the thing. I want to know _why_ the market is increasing, not just how much. You can’t tell that from the yearly figures, so I have to check the month by month. 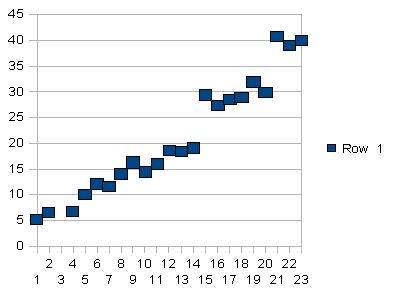 These plateaus are symptoms of market behavior that you can’t see in yearly figures. What caused them? Why did the market go from fluctuations and incremental changes every month to irregular jumps? This is something everyone should be talking about.

I don’t know why the plateaus are happening, but I suspect it’s because of spikes in media attention that ereaders get. In January we had CES, where ereaders were the hot topic. And in July we had the K3 launch.

I could be wrong, so I’m waiting to see the data from October (when the Nook color was launched). If we see another jump, then I am probably right.

But what if I’m right, and then we see a long period without the jumps? What then?

* There’s a blank spot for January because I couldn’t find the numbers.

Bookselling is seasonal with Feb, March and April being poor months. Throw in the shambolic intro of the agency 5 and the first plateau is explained. The July jump was due to the price 'war' between B&N and Amazon that saw hefty ereader price drops on the 23rd of June. The spike in ereader sales led to an ebook surge. Speculative? Cannot think of anything else.

Here is an overview of the booktrade as a whole starting with ,
follwed by .
See also .
Too conservative as far as ebooks are concerned but gives a nice overview.

I don’t know that this is useful at all. It’s akin to short-term Wall Street thinking. As long as the trend overall is up, what’s there to fret over? Spikes and plateaus happen all the time.

I suspect the jumps and plateaus directly correlate to the cost and availability of the ereader devices. As the cost comes down new buyers enter the market and sales go up. I’m suprised a publisher has not come up with a proprietary file format and given away an ereader which requires the buyer to obtain the books from them.

Are the spikes caused by increased ereader sales? Or perhaps ereader media attention as per Nate? Or is it the iPad and reader apps on phones? Perhaps new stores opening – Borders ebookstore opened 7th July, no?
Is ebook uptake wholly a process of pbook cannibalizing , or is it adding to the pie of total readers? Is it almost all fiction? Why is the large textbook market so far largely immune? What is the ratio of fiction vs nonfiction uptake?
Call me a nosy parker but I’d like to know the answers to at least some of the above.

Small point — K3 launched in Sep (first shipments arrived the last couple of days of Aug); if it impacted sales due to a surge of new customers presumably they needed to have the thing in their hands first. Plus, it’s hard to know how many K3 sales went to first time eReader owners. I suspect a good deal were upgraders or previous brand owners jumping ship.

And, no ebook is an island, as they say … at the very least track the trends of ebooks vs hard-covers or pbooks in general.

Finally, recognise that if Amazon ships 50% or more of all paid ebooks, you’ll want to be sure its sales are counted equally in AAP figures for both paper and electronic editions.

The most striking figures, and they seem consistent over several publishers, is that ebooks are going to land around 10% of *total revenues* for 2010 vs 3% in 2009. That’s not a plateau and its a darn sight more impressive than mere unit sales.

Perhaps some additional insight can be gained from visualizing it differently. I don’t have the raw data so I cannot do this myself, but if the data is already public you could try plugging it into ManyEyes and see what different visualizations bear:
http://www-958.ibm.com/software/data/cognos/manyeyes/

[…] do you remember that chart I made a few weeks ago? One prediction I made was that the NC would cause a jump in sales.  It didn’t, but it also […]

[…] plot the sales figures, and so far it looks like my prediction about a Christmas-related bump and a series of plateaus is staying […]