announced today that the Xperia Z2 Android tablet (not to be confused with the Z2 smartphone) is now up for pre-order in the US. This 10″ tablets is a thinner, lighter, waterproof replacement for the Xperia Z1 tablet, and it is shipping in a couple weeks from Sony’s online store.

This tablet has a 10.1″ display with a screen resolution of 1200 x 1920. Weighing in at 439 grams, the Z2 bests the iPad Air’s weight spec but not its screen resolution or battery life. The Z2 is also missing another detail found on the iPad Air: an Apple logo. Of course, some of us see that as a benefit and not a deficiency.

And oh yes, it is waterproof: 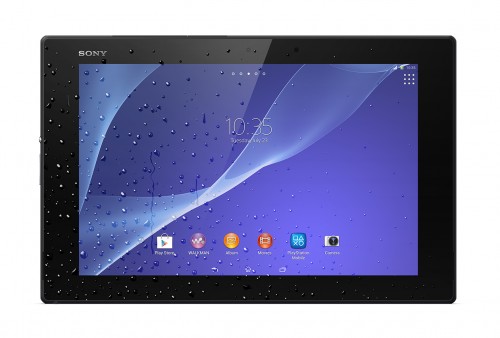 The Xperia Z2 tablet is certified to meet the IP55 standard for dust and waterproofing, which means it can survive being subjected to a jet of water or dust. It also meets the IP58 standard for water resistance; it will remain functional after being submerged in up to 1.5 meters of water for up to half an hour.

In terms of connectivity, the Z2 has Wifi, Bluetooth, NFC,  Glonass (Russian GPS, not available everywhere), and an FM Radio. It’s also designed to act as a second screen for your PC, or stream content to a smart TV via the DLNA protocol.

The Wifi-only version of the Z2 tablet is shipping next month with a $499 price tag; Sony also plans to release LTE and GSM equipped models in various markets.

This tablet turned heads last month at MWC, but I can’t see that there are any in depth reviews just yet. But even without reviews, I think this is a tempting tablet. You should buy one fast, before Sony sells off the division (like they sold off PCs, TVs, and a lot of real estate).

I have the Z1, and what I really hate about it, is the position of the speakers and usb port.

Also, I don’t know how they achieved waterproofing on this one, but you need sharp fingernails to open up the audio jack or usb port.