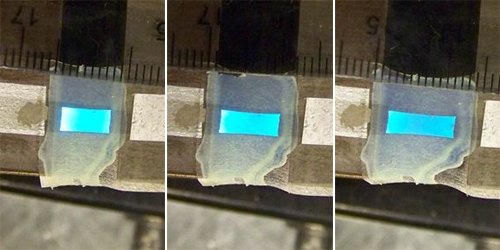 Researchers at UCLA have just demonstrated a new flexible OLED screen concept. It’s no good as a display just yet, but the fact that it can shine while being stretched is a hopeful sign that one day we have a truly pocketable large-screen ereader.

The research team led by Professor Qibing Pei has just published a new paper in the recent issue of Advanced Materials ("Intrinsically Stretchable Polymer Light-Emitting Devices Using Carbon Nanotube-Polymer Composite Electrodes").(The paper covers just how they created a flexible light source and it’s possible that everyone talking about this as a screen tech might be talking through their hats.)

Now, most people look at this and think about how cool it will be to stretch it. That’s not such a great feature, IMO; doubling the screen size won’t double the pixels. That’s why I think the flexible nature of the new screen is more important; you could ball it up and shove it in your pocket without worrying about killing it.

BTW, this demo is in a lab that has the thermostat turned up to 70 degrees Celsius. It’s going to be quite a ways before this tech works at room temperature even as a light source, much less a screen.