Next up on my list of under-performing Google Reader alternatives is Subpug.

This news reader service supposedly launched in late 2011, but it does not appear to still be completely functional. It promised to offer a no cost, login-free service that could be quickly expanded to your smartphone or tablet.

Unfortunately I cannot get Subpug to work.

I got as far as importing my RSS feed catalog, but the service froze after retrieving the first few dozen feeds. And that’s a shame, because I liked the theme and I liked the concept behind anonymous accounts.

Here’s what the service looks like when you first visit. Is it just me or does this remind you of a Mac design aesthetic? 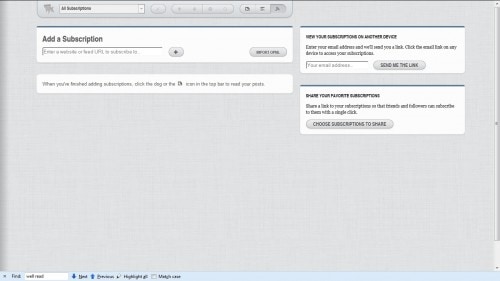 That is as far as I have gotten, but since I do like the concept I don’t want you to go away with nothing. Here’s what Techcrunch reported when Subpug launched:

You can choose from certain pre-subscribed options like Gadgets, Music, Fashion, and even Geek Humor, or you can build your own/import your Google Reader OPML. The set up process takes all of three seconds and you’re ready to read, mainly because there’s no sign up or log in of any kind.

The first thing you’ll notice is that it’s a totally different look from Google Reader, with a grey background and a nice, clean layout. But there’s more: on the left-hand side of the page you’ll see comments from the story that’s highlighted. I find this to be a pretty smart addition to your average RSS reader. I mean, what’s a post without the comments?

Users can also choose to hide certain topics from specific feeds, and there are options to share on Facebook, Twitter, Google+ etc. Subpug also added some cool cross-device functionality.

I am sharing this service in the hopes that it will work for someone else. I really like the features that Techcrunch described, and I also like the concept of using a service without logging in. Anonymity is the exception these days, and sometimes it can be useful to get a throwaway account that isn’t tied to you.

Of course, Subpug probably puts cookies on your computer so they can identify you on your return trips, and there’s no way to be sure that they’re not collecting info elsewhere. But in the absence of evidence I will not assume guilt or nefarious intentions.

One of Shelfari’s Most Active Members is a Computer Program, And It Loves KDP eBooks

I see that you are reviewing a lot of lesser-known alternatives to Google Reader. I have been building my own and would love a review from you. I have been reading your other reviews and I like that they are honest and critical. If you find the time, I would appreciate the chance to see what you think. The link is www.feedfiend.com. Feel free to contact me with any questions. Thanks.