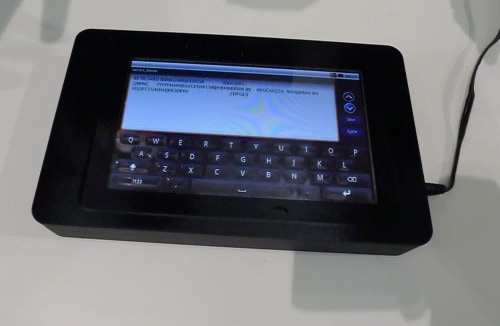 One of the hot new technologies on display this week at SID Display Week is a clever new alternative to the problem of the lack of physical feedback on touchscreen.

Tactus had just the one early prototype on hand, and it was an impressive sight. They’ve developed a way to add a layer on top of your standard touchscreen which, when enabled, adds a set of buttons to the otherwise flat screen. This layer consists of a network of channels  which feed a new type of fluid to certain areas on the screen.  When triggered, you’ll see and feel clear buttons on top of the touchscreen, making this the first retractable touch feedback user interface.

The buttons can be enabled and disabled at the flick of a switch, and while in use they don’t drain battery life. But there is some cost to enabling and disabling the buttons, of course. They feel much like any buttons on a mobile device, and while that description is vague it’s also a positive. I’ve used devices with buttons that were more difficult to use (the Amazon K3, for example), so I’m pleased to say that this is far from the worst on the market.

Now, I’ve read The Verge report on this tech and I must disagree with some of the points. I thought the buttons provided enough feedback, and in any case the production model will likely improve on any shortcomings.

The button layer can still be felt and seen when deflated, but it wasn’t a huge visual distraction and the layer didn’t make the screen all that much more difficult to use. Keep in mind that this is a prototype; I think that when this gets into production the button layer is going to be much less obvious when not in use.

Right now the Tactus prototype is using segmented panel with predefined spaces to be inflated as buttons, but their long term plans include much finer control. They’re hoping to achieve a panel that can match the resolution of the underlying tablet, and that would enable them to create buttons of any size  on-demand.

It’s not expected to be on devices until the second half of next year.

About the gallery: Several of the photos show a bare prototype unit. If you look at the face you can see the channels that the fluid will flow through. You cannot see the buttons because they  would be formed by another layer on top of the one you see in the bare prototype. The screen assembly under that face is a run of the mill 7″ screen/touchscreen component from Touch Revolution, one of Tactus' partners.

Is Losing a Single Editor a "Setback" Amazon Publishing?

I wondered how it worked. Liquid? Now we have to worry about leaky screens or some goop leaking into the components? Next!

Really neat! Thanks for this report. Did you get any information about pricing?

They couldn’t say, nor would I expect them to know at this point.

Mike has a good point. Injecting air would be better.

Seriously? You want a little canister of compressed air and a wee pump in there? Exactly how safe would that be on a jet if air pressure is lost? You like a little splodey in your pocket?

LOL Imagine a partial failure. "That wasn’t me, it was the tablet."

And with the stupid restrictions on liquids the TSA have, they’ll let a device with liquid inside it on a commercial jet?

I’m just happy to see anything that does this. The ability to extrude buttons, to me, is what has been missing from the touchscreen revolution. Having to look down all the time to anything is annoying. If they do get this out, though, we some kind of mix of resistive and capacitive sensors, since you want to be able to feel the buttons but have them only go off when you press.

[…] (and it should be in devices by the second half of 2013 – there’s a nice write up over here). And it might have some important advantages.On the bus into town yesterday two young children […]

New MIT Invention Lets You To Reach Through The Screen And Touch Things (video) – The Digital Reader 20 November, 2013 um 12:35 pm

[…] do you know what could make it better? What if this idea was combined with the morphing onscreen keyboard tech from Tactus? That would combine the best of an LCD screen with 3d interactivity, resulting in a gaming surface […]