With little fanfare, Target has ended the two plus year old with Barnes & Noble to carry Nook hardware in stores. 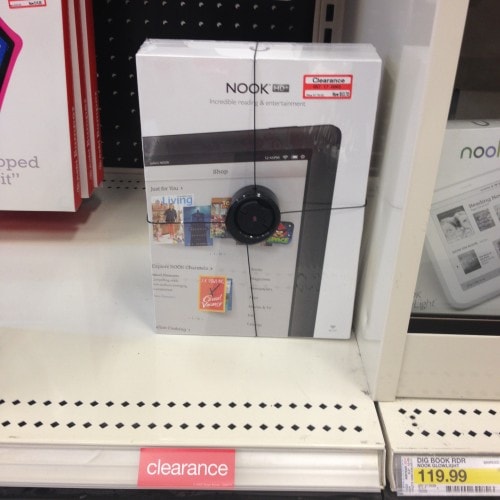 A post on the SlickDeals forum tipped me to the news, which I confirmed at my local Target this evening. The retailer has discontinued carrying the Nook HD, the Nook Glowlight, the Nook HD+, and put all remaining units on clearance.

The space formerly occupied by the Nook hardware has been filled with other tablets, including Samsung’s.

I’m told that the prices on the clearance items are in the range of $30 to $55, or at least they were in that range before all the stock was snatched up. My local store sold the last two units yesterday, and the Target website doesn’t even have a listing for any of the Nooks any more.

What a quiet and sad end.

When Barnes & Noble signed a deal in late 2012 for Target to exclusively carry Nook ereader hardware (a deal which involved Kindle and Kobo getting kicked out), it marked the pinnacle of B&N’s Nook success, and it was followed a couple months later by the start of a steady downward decline in revenue and market share.

And now, two years later, B&N is carrying another company’s hardware with their brand slapped on top, and is planning to separate itself from the Nook unit in which it invested so much money, blood sweat, and tears.

How a PlasticLogic Screen is Made (video)

Nate it can also be that since Samsung builds the hardware that they are only going to go Samsung from now on. I don’t even think I ever seen the glowlight in any Target stores. From what a friend of mines said that works at a BN store they were told by BN to send back all preowned nook devices generations prior to Samsung and the 2013 Glowlight so if a customer needed their hd or what not replaced only their website will be exchanging them from now on, I confirmed this at another store as well. They are only focusing on Samsung and the glowlights now. He said they will still offer support for them but not replacing them in store. Apparently the new strategy is Samsung and the glowlight only.

Well, the *have* go focus on the Samsung. The have a million tablets to sell
Or else.

[…] KDP to lose any sleep. #4 is the deal breaker for me. Also, Target hammers what might be the last nail in the Nook […]

It is a sad end. It’s worth noting that the tablet and ereader devices themselves were never the problem. I’ve only heard good things about them. The problem was and is their store and the shopping experience. Those things are NOT going away, unless B&N decides to just be a brick and mortar chain.

Hmm. Wonder if this means Target will go back to crrying Kindles and Kobos?

that should be: carrying Kindle and Kobos

That would be a good move, but I don’t know that they’re going to do so..

Worth picking up a glow if it’s cheap and can be rooted.

Actually, there’s conflicting reports that this cancellation only extends to the Nook HD and HD+.

[…] isn't the only retailer to remove old Nook hardware from its shelves. Store-level sources inside B&N have told me, and a reader has confirmed, […]

[…] With little fanfare, Target has ended the two plus year old with Barnes & Noble to carry Nook hardware in stores. Read more here. […]