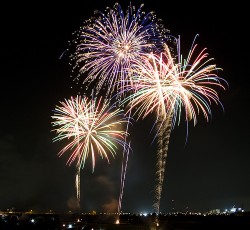 It’s been quite some time since I last discussed how many visitors this blog is getting, and today that interregnum ends.

It’s been a great year at The Digital Reader, and website traffic has never been better. Over the last 6 months* this blog was visited 1.4 million times, up from 932 thousand visits over the same period of 2011. I had over a million unique visitors, a significant in crease from the not quite 700 thousand in 2011. Page views were also up 50% over the second half of 2011, with 2.1 million pages having been read in the last 6 months.

I’ve posted a couple clippings from Google Analytics below, and all in all I’m rather pleased about my gains. It’s not quite the doubling of traffic which was my goal this year, but it’s still not bad.

On a related note, this blog is 3 years old and has been growing more or less continuously for all that time. The first year saw a meteoric growth, and in the second year traffic peaked at a 40% increase in December.

* In case you’re wondering why I didn’t compare the entire year: There was a month long period in 2012 when GA wasn’t collecting data. I wasn’t checking traffic either, so it took me a while to catch the lapse.

HarperCollins Launches Second Print+eBook Bundle Pilot in as Many Weeks

Infographic: Everything You Ever Wanted to Know About Fonts

Mr. Nate, I am not surprised. One can always find useful information from you and sometimes from the comments. Damn, it is also entertaining, especially when you put a stop to crap and when Mike Cane puts in his dollar worth of opinion. By the way, what is a "unique" visitor and do several visits a day by people (me) count against you? See you in 2013!!

>>>and when Mike Cane puts in his dollar worth of opinion

A dollar is worth about a nickel these days. (Awaits the pile-on…)

You may have even more visitors as some of us use blocking add-ons.

Yep. Google Analytics misses between a fifth and a third of my traffic. I’m also using a second tracking service called StatCounter, and it gathers stats with on a plugin, not the Javascript used by GA.

I started visiting this site late this year. I saw someone on MobileRead that recommended it. I find the information here quite interesting.

Nate, many thanks for all of the effort you have put into preparing/maintaining this resource.
It’s one of the few I keep an RSS feed going for since you have so many interesting things to say.