the UK retailer Tesco announced their Hudl tablet last September, no one really knew what to expect.

This tablet cost £119, which was not a bad price for a 7″ tablet which ran Android 4.2.2 on a quad-core 1.5GHz Rockchip CPU with 16GB Flash, 1GB RAM, and a decent screen resolution (1440 x 900). The Hudl was fairly popular with reviewers, and now we know that it is seeing some success with British consumers.

Tesco recently announced that they have sold 500,000 tablets since September. Based on the latest estimates from Gartner, this means Tesco is a bigger tablet maker than Blackberry.

Update: A reader has pointed out to me that the Playbook has been discontinued. There’s been no announcement from Blackberry, and even though this tablet has been updated recently and is still available for sale, I think he’s correct.

That’s not bad for a first effort, and as a result of their success Tesco has confirmed that they are planning to launch a second model later this year. They have not released any details or specs on the new tablet, but there is a good chance that the new model will also be developed in partnership with Archos. 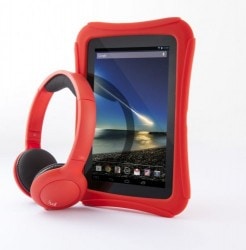 The Tesco Hudl was launched as a subsidized tablet along the lines of the Kindle Fire. In addition to Google Play, the Hudl also ships with Tesco’s BlinkBox service, which sell ebooks, music, and video. Consumers in the UK can also use the Hudl to order groceries from Tesco.

Tesco has not revealed whether the subsidized model is working for them, merely saying that "Blinkbox services also continue to grow ". Their most recent financial report does mention that online sales were up 11% while overall revenue fell 6%.

I doubt they would plan a second tablet unless they were at least breaking even on the first.

For Tesco Clubcard holders (16 million active) the Hudl will cost them just £60 in loyalty points.

The drop in revenue is one happening across the UK supermarkets due to competition from a handful of super-low-cost stores and would appear to be pertinent to groceries rather than any other goods or services Tesco offer.

Tesco is invariably in the top five (usually top three) of the world’s biggest retailers, with revenue – and profits – Amazon can only dream of.

The PlayBook was discontinued some time ago. Quite a feat to beat a dead thing. This article is kind of embarrassing.

Well this is embarrassing.

There’s no mention in Wikipedia of the Playbook being discontinued, and I can still find it on Amazon, Best Buy, and elsewhere. And it got a firmware update a few weeks ago.

But you’re right, it does appear to be discontinued.