Whether you use a sundial, Rorschach-like inkblots, or the traditional analog clock, there are many different ways to show the time, but few are quite as unusual as the Text Clock by Ross Goodwin.

Currently a grad student at NYU, Goodwin has developed a new type of clock as a class project. His clock uses public domain text copied from Project Gutenberg to display the time.

Visit the Text Clock page on Goodwin’s site and you’ll see something like this. The time is called out in a red font. 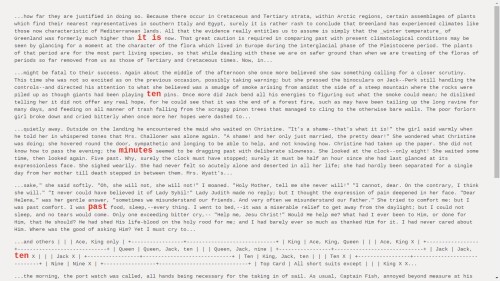 Each of the above paragraphs is a text fragment from a different book, and then all of the fragments were assembled into a single whole. Refresh the page, and you’ll see a different set of fragments showing the current time.

While we’re on the topic of hacking public domain works, Goodwin also took part in the Open Book Hackathon a couple weeks back. Hosted by the NYPL and Readium, this hackathon challenged participants to find new uses for and new ways to access public domain works.

Goodwin didn’t work on Text Clock at the hackathon, but he did contribute to a project called Musapaedia, which is described as:

Goodwin has uploaded the code for that project to GitHub.

I wasn’t able to attend the Open Book 2015 hackathon, but I do see that other projects include one which reflowed scanned page images so they work better on smaller screens. It sounds strange, yes, but it also looks interesting.

You can find details about the  hack day, including info on the projects, here.

Updated: Half of All eBooks Downloaded in Spain in 2011 Were Pirated, And Other BS

My Dog Ate My eReader