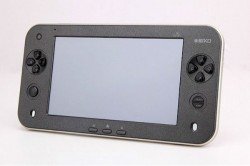 JXD is back again, only this time they’ve swapped their usual knockoff handheld with an Android tablet. The JingXing S7100 might look odd for a tablet at first, but it has decent power under the shell.

It’s built around a 7″ capacitive touchscreen, and it’s running Android v2.2 on a Cortex A9 CPU with an integrated Mali 400MHz GPU. There’s no mention of a card slot, but JXD is offering the S7100 with between 2GB and 16GB of storage.

This tablet also has a pair of cameras (VGA and 2MP), Wifi, and HDMI out. There also appear to be a pair of speakers on the front in the bottom corners.

It ships with a number of emulators, including ones for the original PlayStation, Nintendo 64, and others. JXD is also providing their own app store, and the screen shot shows a decent selection. 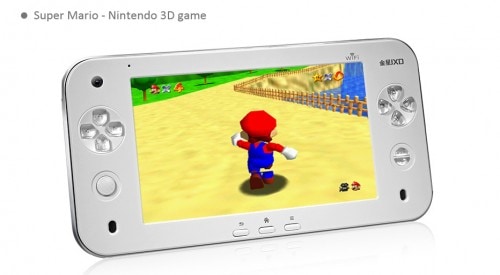 If you watch the video, you’ll see that the S7100 is running a set of custom apps on top of Android. Performance appears to be pretty zippy. But the interface is also entirely in Chinese, and the only Chinese I know I learned from Firefly.

So has anyone tried one of these hybrid devices before? The closest I came was the Nokia N-Gage, their phone/gaming crossover. The first-gen N-Gage was an awkward brick of a phone with not very many interesting games; so as far I was concerned it was a failure on multiple parts. I couldn’t carry it in my pocket nor did I want to play games on it.
And then there was the confusing interface (I had to read the user manual to find the power button).

I’m thinking that this might be the wrong screen size. A 4″ or 5 screen might work better because then it would be pocketable; this baby is bigger than a Kindle. it’s big enough that you have to use a bag or carry it by hand. At that point you might as well jump to a 9″ screen and get some real enjoymnet out of it. What do you think?

If Barnes & Noble Goes Out of Business, Would Anyone Care?