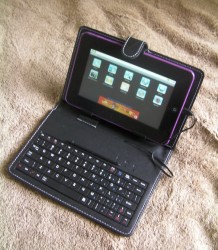 This is  one of those tablets that shouldn’t be set aside; it should be thrown with great force.

This is only going to be a brief review; my unit did not work the way it was supposed to. I only bought because it had a keyboard built into the optional case; the specs and appearance were unimpressive. Since the keyboard does not work with the tablet, there is no reason for me to go any further.

That might not seem like a good reason to abandon a tablet, but there are many other tablets in the price range and any number of them have better specs, brand name, or price.

I’m only going to go through my reasons to avoid the tablet; my main reason is that it violates 3 cardinal rules.

I’m not going to get into a detailed hardware description (walmart product listing); this tablet is not worth my time. But I will say that this tablet truly feels like cheap junk, which is a first. Even cheaper, junkier tablets usually look better at first glance, but the Net’s Go is straightforward about its shortcomings.

I came across the Kaser Net’s Go while searching the Wal-mart website for another tablet. The product listing was unimpressive, and the image of the tablet was unappealing. When I finally got my hands on it I realized that the device actually looks worse than the picture, which was hard to believe. 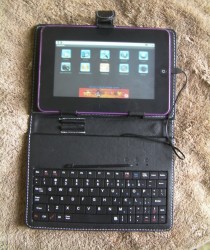 As I said before, I got this for the keyboard and it didn’t work. While troubleshooting the problem with Google I found numerous reports of poor or nonexistent service from Kaser. I have to admit that I didn’t even try to contact kaser after I found the 4th complaint; it seemed like a waste of my time. But I did find the user manuals. The keyboard was not mentioned, unfortunately, nor did I find any tips on how to get it working.

Even if the Net’s Go had not had any other problems, it would have entered my junk list as soon as I turned it on. It’s using  a non-standard home screen, and that’s a no-no in my book.  The home screen also has ads. I will not tolerate surprise ads after I’ve paid for a product. Fuck. That.

The 3rd cardinal rule broken by this POS is that it kept trying to force me to create an account and log-in. That is such a stupid design. There’s no reason for them to copy Apple’s mistake; this thing should run right out of the box.

There are better and cheaper tablets on the market. Get one of them, not the Kaser Net’s Go.

Man, why do you keep doing this to yourself? It’s painful to read these things! Sounds like the $99 CVS Coby tablet was the all-time el cheapo winner.

Hm, I keep mixing up the two crap C tablets. Not Coby, it was the Craig.

well my tablet is frozen wont go any further. i have had it for about two weeks and i have had nothing but problems with it. i have a kaser nets go 2. any one that may know how i can get a manual for this free or troubleshooting that would be great. theres is no main reset on it.on outside. have to go through the screen but its not working.

I went to www.kasernet.com and downloaded a manual. The one that came with it had writing so small, it is hard to read.

I agree on hundred percent with review that the kaser net comes first in being the worst s-called tablet ever emerge on the market. I even believe walmart whould he sued for carrying and selling such junk when i tried to return mine to walmart after less than 30 days, they gave me all kinds of reasons? Qhy i should return it to the company. Walmart knew very well that the kasernet people were not returninng calls and that all calls were being directed to mailbox. Well so much for $186.00 . I tried selling it on ebay for a mere $49.00 and after 3 months listing, ,it is still lying in box in my patio. I got the keyboard to work but i would have to be within six feet of a wireless router tobe able to pick up a signal. I could go on all night about my experience with product, but it,s not worth my time

I have a Kaser 9″ Net’s Go2 YF732-8G tablet and have found that outside of the annoying Kaser Advertisement upon startup this tablet is Fast and with the Google Play Store has a great many apps that work great with this unit. The only complaint I have is Kaser’s product support 100% TOTALLY SUCKS. If Kaser was more Consumer Oriented, this Tablet would be hard to beat.

I bought the 9″ from Sears. It didn’t work upon coming out of it’s package. I then fought with Sears.com to resolve this issue…. in the end returned it to the store at their request and purchased yet another 9″ same brand… kaser has decided that the best thing to do is just cancel my order so I am not even going to receive my tablet. In the end I will not only NEVER buy another kaser product…. Sears has also lost a lifelong customer with their lack of response.