The Lenovo Yoga is Well Named 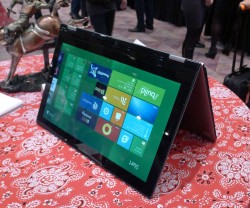 This is one of those stories I couldn’t let go; the Yoga looked so neat. Lenovo had a new laptop concept on display. it’s called the Yoga, and it combines the extremely light build of an ultrabook with a double hinge.

As you can see from the photo at right, the Yoga can fold through a full 360 degrees of motion.

In past posts I’ve mentioned that I liked tablet convertibles, laptops that can pivot and fold their screen face up on top of the keyboard. (One example would be the Dell Inspiron Duo.) Most of those laptops are off the market, but it looks like Lenovo might be bringing the idea back.

So this is a 13″ laptop with a 10 point capacitive touchscreen, and the demo unit ran an early build of Windows 8. Other than that most of the specs were up in the air. And so were the price and release date. But Lenovo did say that  the Yoga had a runtime of over eight hours of battery life. They’re also planning to ship it with Intel’s next-generation Core i3/i5 processors, also known as Ivy Bridge.

As a tablet, it’s quite heavy, but then again how many 13″ tablets have you tried? And as a laptop it’s thin, thanks to the ultrabook label. Intel requires ultrabooks to be no more than 13mm thick. The Yoga sneaks in under the touchscreen exception to that rule, and it’s still less than 18mm think.

The release date is still up in the air, but it seems pretty obvious that the Yoga won’t ship until Windows 8 is released later this year. I cannot wait to see the reviews. 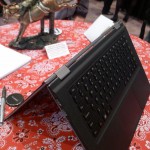 How Not to Respond to Negative Reviews: The Kathleen Hale Edition