The Onion Gets Into eSingles With Joe Biden Autobiography 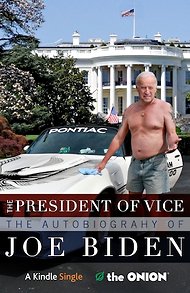 When Amazon announced the Kindle Single Store in early 2011 they intended to offer a curated, high-quality source of serious and thoughtful short works that didn’t quite fit as either a magazine article or a book. I don’t think they were planning on The Onion releasing their satirical "autobiography" of Joe Biden, but that’s what happened this week.

The Onion has assembled several previously published articles and bundled them into The Onion’s first standalone ebook. While the world’s best read paper has been publishing anthologies of their best work,  The President of Vice is the first to focus on a single ongoing story.

Here is  how it’s described in the Kindle Store:

The Onion is proud to present The President of Vice: The Autobiography of Joe Biden. In this scandalous memoir, America’s favorite politician discusses his early years, before he became ultimate wingman to the leader of the free world. For the first time ever “Diamond” Joe discusses the formative experiences of his life, including his childhood selling hooch in Scranton, his years cruising college campuses picking up co-eds in a Del Rio, the grade-A tang he plowed in the summer of ’87, and his "sweet ass gig" as Senator of Delaware.

No idea. I didn’t misspell the word.

It’s on the cover.